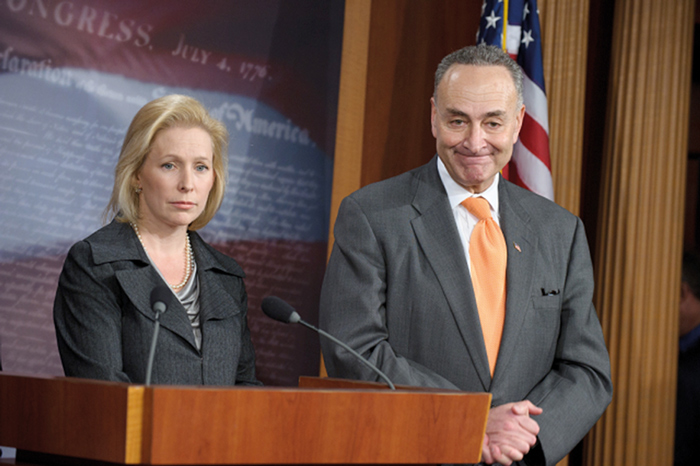 “From conversations with religious leaders and communities, it’s clear there is more work to be done to prevent anti-Semitic violence and other hateful activity, and to ensure that all New Yorkers can worship and live in peace,” Sen. Kirsten Gillibrand said.

Hosted by the Federal Emergency Management Agency’s Grant Programs Directorate, in partnership with the Department of Homeland Security Center for Faith and Opportunity Initiatives, the nine webinars will include an overview of the NSGP, information on grant program eligibility and allowable costs, and a moderated question-and-answer session.

According to Schumer and Gillibrand, the NSGP helps nonprofits plan for and ready themselves against a terrorist attack by providing funding to support physical security enhancements to high-risk locations. The senators have said that the NSGP has improved efforts to keep at-risk organizations safe by promoting emergency preparedness coordination and collaboration activities between public and private community representatives, as well as with State and local government agencies. Synagogues, churches, mosques, schools and other faith-based community centers, like JCCs, are just a few examples of nonprofit organizations that could apply for NSGP funds.

To supplement the webinars, Schumer and Gillibrand have called on FEMA and the State Division of Homeland Security and Emergency Services to host a public, in-person forum in Brooklyn for NSGP applicants in the community. As the elected officials noted, DHSES works on behalf of FEMA and DHS to solicit, review, and score federal NSGP applications from New York, including applications generated in the five boroughs.

According to the Empire State senators, the webinars and request for a public forum come as recent attacks on places of worship highlight the unique vulnerabilities that communities face across the country. The February 2019 FBI, DHS, and NCTC Joint Intelligence Bulletin found that domestic extremists, perpetrators of hate crimes, homegrown violent extremists, and foreign terrorist organizations continue to pose a lethal threat to faith-based communities, particularly against perceived soft targets such as religious and cultural facilities. Recent incidents targeting synagogues, churches, mosques, and other religious centers and nonprofit organizations include the Dec. 28, 2019 attack at a private Hanukkah celebration in upstate Monsey, N.Y.; the shooting the next day inside West Freeway Church in Texas that claimed three lives; and the Charleston church massacre of 2015 in which nine African-Americans were killed during a Bible study at the Emanuel African Methodist Episcopal Church.

“New York City community members, in Brooklyn and everywhere, should not feel vulnerable while gathering in their houses of worship, while dropping their kids off at school, or while heading to the local JCC or any other faith-based community center. Sadly, after hearing from communities in Brooklyn, and around the city, the fact of the matter is that many feel unsafe,” Schumer said.

“From conversations with religious leaders and communities, it’s clear there is more work to be done to prevent anti-Semitic violence and other hateful activity, and to ensure that all New Yorkers can worship and live in peace,” Gillibrand added. “That’s why I am pressing for an increase in NSGP funding to protect places of worship and other nonprofits, and I am pushing FEMA and NYS DHSES to host a public forum in Brooklyn to help our Jewish and faith-based community members secure these vital resources.”