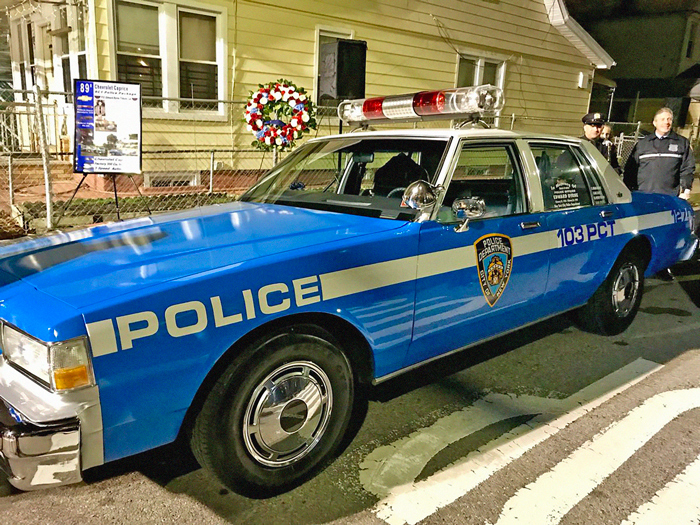 In our own little way, The Forum has pledged to never forget the sacrifices of hero cop Eddie Byrne and his family by running a story about the monumental event each and every February.

Hundreds of cops—both retired and active duty—gather at the site of Byrne’s murder, the corner of Inwood Street and 107th Avenue in Jamaica, each year on Feb. 26. And they’re never alone. Borough civic leaders, elected officials, clergy, community members, and firefighters have made that solemn promise to never forget.

A member of the NYPD for only seven months, Byrne was ambushed, shot and killed while he sat in his marked patrol car outside the house of a witness in a drug case in the early morning hours of Feb. 26, 1988.

The four men that were convicted of the assassination were members of a drug gang that had been instructed to kill a police officer. At approximately 3:30 a.m., one of the suspects knocked on the passenger-side window of Byrne’s car to distract him as a second man opened fire just outside the driver’s side window. Byrne was shot five times in the head. He was 22 years old.

“To make this city so much safer than it was in 1988 is nothing short of extraordinary and incredible. You’ve done an amazing job and there can be no greater tribute to Eddie than the drive to fight down crime,” Byrne’s brother, retired Deputy Commissioner Lawrence Byrne, said to his fellow Finest on Feb. 26, 2017.

While it is critically important that we never forget what Eddie and his family have given to our beloved city, there is more than one way to contribute to his memory.

According to the Police Benevolent Association of the City of New York, Eddie’s assassins are once again up for parole in November. They have been denied release several times.

However, in this new, distinctly anti-police era, another round of “No’s” from the State Parole Board is not exactly a slam dunk. For example, cold-blooded multiple cop-killer Herman Bell, 70, was granted parole on March 14, 2018—his eighth attempt. As we have written before, Bell forfeited his natural right to freedom on May 21, 1971. On that day, Bell and two fellow cowards lured City Police Officers Joseph Piagentini and Waverly Jones to their deaths. As the cops were returning to their squad car in Harlem, the three proud Black Liberation Army soldiers pumped bullet after bullet into their backs.

Piagentini was shot nearly two-dozen times, with the final round coming from the hero’s own department-issue service revolver as he begged for his life.

The Parole Board’s decision to free Herman Bell has to go down as one of the most heinous miscarriages of justice in the history of our beloved state. Because on May 21, 1971, Herman Bell consciously gave up his right to breathe free. There should be no mitigating factors or loopholes that he could take advantage of in order to one day find himself living among the civilized.

That brings us to Philip Copeland, Todd Scott, Scott Cobb, and David McClary—the “men” who ended Eddie Byrne’s life. Please go to nycpba.org/community/keep-cop-killers-in-jail/ and follow the instructions to send Albany a message before November.

Some animals don’t deserve to be let out of their cages.