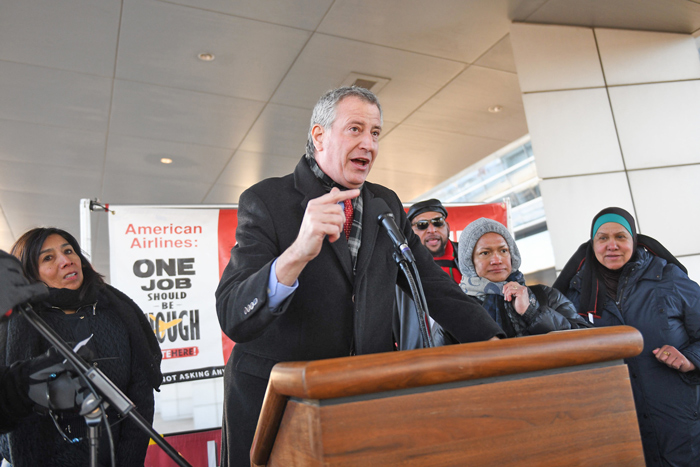 “No corporation is above the law, and thanks to the brave airline service workers who came forward, Eulen America will have to pay up for disregarding the rights of their employees,” Mayor de Blasio said.

The settlement requires the company to pay $103,800 in restitution to over 400 workers—including wheelchair attendants, customer service representatives, baggage handlers, and cargo agents—credit workers with additional sick leave worth $46,383 that they can use through mid-2021 and pay $9,555 in civil penalties.

The City Department of Consumer and Worker Protection’s investigation, which was conducted before the COVID-19 pandemic with complaints brought by SEIU 32BJ, found that Eulen violated the NYC Paid Safe and Sick Leave Law workplace-wide in several ways. First, the company accrued sick leave for new employees at a rate of one hour for every 43 hours worked, instead of the required one hour for every 30 hours worked. Second, Eulen had an unlawful “use it or lose it” policy under which employees who did not use their sick leave accruals by the middle of the next year, lost the leave they had earned. Lastly, Eulen’s written sick leave policy contained illegal provisions about medical documentation, penalizing employees for using sick leave, requiring advance notice for unforeseeable uses of sick leave, and on sick leave eligibility.

“Paid safe and sick leave is critical for the safety and well-being of employees, especially as we recover from this pandemic,” said Mayor Bill de Blasio. “No corporation is above the law, and thanks to the brave airline service workers who came forward, Eulen America will have to pay up for disregarding the rights of their employees.”

The settlement requires the company to: pay $103,800 in restitution to more than 400 current and former workers; credit sick leave to employees who were denied sick leave, which is valued at approximately $46,383; pay $9,555 in civil penalties; implement a safe and sick leave policy that is compliant with the law and corrects the violations in the company’s prior policy; train managers and supervisors on the City’s Paid Safe and Sick Leave Law; and appoint a compliance officer who monitors and reports on compliance with the law.

“Workers should not be going to work if they are sick, especially in transportation hubs where thousands of people are passing daily. Paid sick leave is more important than ever right now during this public health crisis—workers must be able to use their sick leave without illegal restrictions or retaliation,” said DCWP Commissioner Lorelei Salas. “We thank the workers for bravely coming forward to report violations that affect hundreds of working people. We are pleased to put money back in the pockets of airline service workers during these difficult times and ensure they can use their sick leave going forward.”

The settlement against the airline contractor follows a separate lawsuit filed against American Airlines in 2019 for violating the NYC Paid Safe and Sick Leave Law. The case is pending at the Office of Administrative Trials and Hearings.