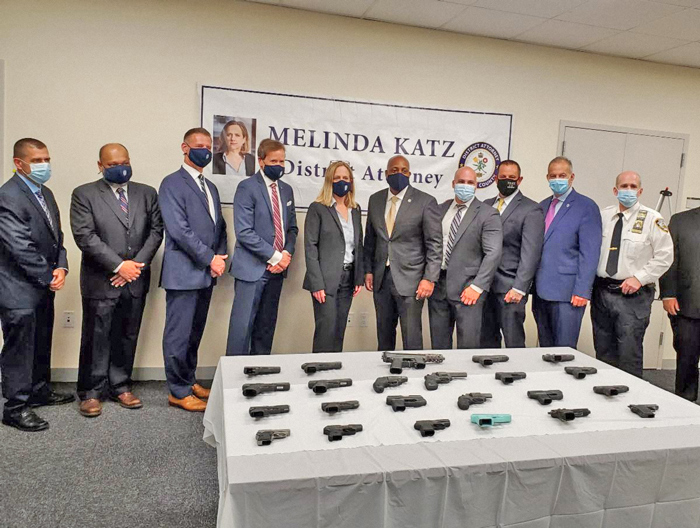 Authorities pose with the guns taken off the streets as a result of the investigation.

Three borough residents and one man who calls Richmond, Va., home have been charged for their roles in using the infamous “Iron Pipeline” to smuggle guns purchased in Virginia to NYC that wereeventually sold illegally on the streets of Queens, District Attorney Melinda Katz recently announced.

Jessica “Cess Milla” Heyliger, 35, of Jamaica; Laquan Benson, 36, of Richmond, Va.; Mitchell “Mitxh” Myree, 36, of Jamaica; and Sharod “Yayo” King, 32, of Woodside have variously been charged with criminal sale of a firearm, criminal possession of a weapon and conspiracy.

The complaints allege that the ring operated with Heyliger as the principal dealer of the weapons—Benson as her main supplier and Myree acting as a backup. King allegedly was Heyliger’s salesman.

The investigation began in September 2019, when an undercover police officer allegedly purchased a handgun and two large capacity ammunition feeding devices from defendant King in Queens. In December 2019, the Court authorized electronic surveillance on King’s cell phone. Upon taking office in January 2020, Queens DA Katz expanded the investigation to include the trafficker who brought these firearms into the borough.

According to the complaints, the defendants allegedly sold an undercover police officer a total of 23 guns during 13 separate transactions. As part of the conspiracy, DA Katz said, King communicated directly with a buyer (actually an undercover police officer) and delivered firearms, large capacity magazines and ammunition to that “buyer.” Most of the illegal sales occurred in and around Astoria. Heyliger is accused of providing all of the weapons and ammo to King.

All but two of the weapons sold by Heyliger and King to the undercover officer were allegedly supplied by Benson, who mainly acquired the guns through the internet—using a classified advertisement website with sections devoted to the sale of firearms. The investigation revealed that Benson would use an alias and make deals with private firearms re-sellers in Virginia. These guns were then transported to New York City and delivered to Heyliger in Queens, according to the charges.