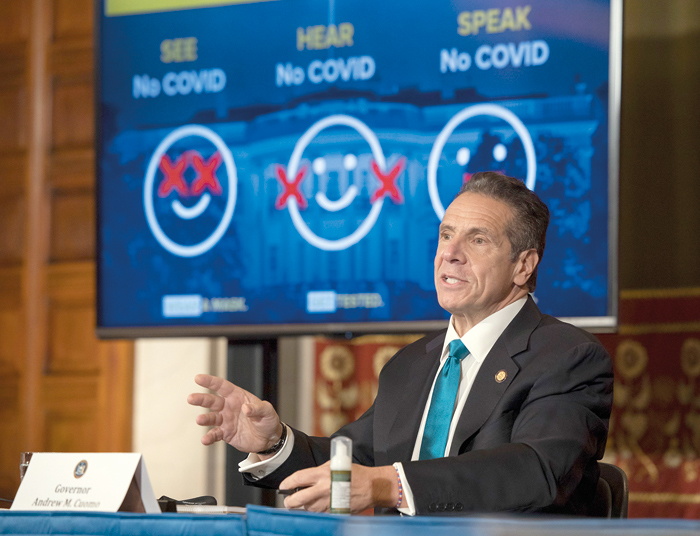 Photo Courtesy of Mike Groll/Office of the Governor

“A small number of business owners still don’t think the rules apply to them — even in focus zones where the state has tracked increased spread — and these suspensions should serve as a reminder that we will take action against those who callously put New Yorkers in harm’s way,” Gov. Cuomo said.

Governor Andrew Cuomo on Friday announced the State has suspended liquor licenses for 21 additional bars and restaurants in New York State—including four in Queens—after finding egregious violations of pandemic-related Executive Orders, including three establishments illegally operating within focus zones designated by the state as part of its micro-cluster strategy.

These new suspensions bring the total number of liquor licenses suspended during the coronavirus pandemic to 238, Cuomo noted. In total, 1,362 charges have been filed against bars and restaurants for violating coronavirus-related rules. Businesses found in violation of these regulations face fines up to $10,000 per violation, while egregious violations can result in the immediate suspension of a bar or restaurant’s liquor license.

“Rules are only as good as enforcement, and as we have ramped up checks on bars and restaurants, compliance has increased, creating a safer environment for everyone. A small number of business owners still don’t think the rules apply to them — even in focus zones where the state has tracked increased spread — and these suspensions should serve as a reminder that we will take action against those who callously put New Yorkers in harm’s way,” Cuomo said. “As we continue to fight clusters across the state, bar and restaurant owners should know that the State’s task force will keep enforcing the law, and if they do not follow the rules they will lose their right to serve alcohol.”

The emergency suspensions were ordered by State Liquor Authority Chairman Vincent Bradley, Commissioner Lily Fan and Commissioner Greeley Ford at special meetings of the Full Board between Sept. 30 and Oct. 21, conducted by a digitally recorded video under social distancing guidelines. Emergency Summary Suspensions are imposed when the SLA finds the continued operation of a licensed business threatens public health and safety. Suspension orders are served immediately and remain in effect indefinitely, with the maximum penalty including the permanent revocation of the license and fines of up to $10,000 per violation. Licensees subject to an emergency suspension are entitled to an expedited hearing before an SLA Administrative Law Judge.

On Sept. 27, the New York City Sheriff’s Office observed over 100 patrons inside the premises drinking, smoking and singing karaoke, in flagrant violation of the Governors’ Executive Orders in place since March 16, 2020, which restricted indoor dining in New York City before Sept. 30 and prohibited activities like karaoke.

On Sept. 25, the New York City Sheriff’s Office responded to the location following complaints of social distancing violations to find a wedding in progress with nearly three-hundred patrons inside — six times the number of attendees currently allowed at events — along with a band playing and numerous patrons observed standing, mingling and drinking, most without facial coverings. 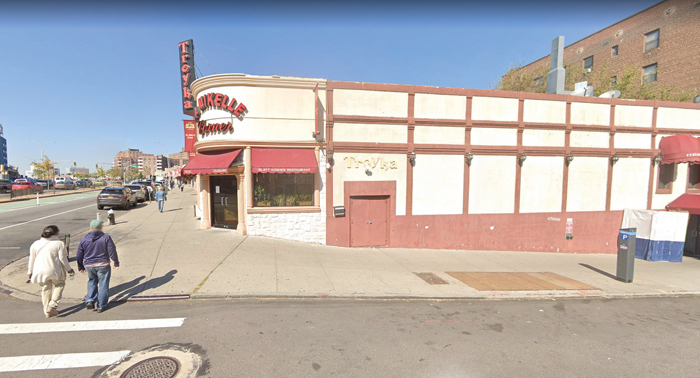 On October 9th, NYPD officers observed the premises using a tent set up on the sidewalk in front of the premises, which was blocking the pedestrian right of way in violation of New York City’s Open Restaurants program.  According to the police, numerous patrons were observed standing, drinking and congregating under the tent. Despite additional warnings, including a follow-up visit by the NYPD on October 15th and an inspection by SLA investigators on October 17th, the premises continued to utilize the illegal tent. The location is a repeat offender, with pending charges for multiple EO violations already issued by the SLA.

On October 18th, New York City Sheriff’s Office deputies observed several individuals entering the business, which was operating in a “Red Zone” area identified by Governor Cuomo’s Cluster Action Initiative and was limited to take out and delivery only. Despite operating with the establishment’s front lights off to give the appearance the business was closed, deputies heard music playing inside and entered the premises, observing two rooms with about 25 patrons in each — eating, drinking, and dancing without facial coverings or adherence to social distancing protocols. Deputies then entered an annexed space inside the building called the “Troyka Restaurant” and discovered approximately 45 additional patrons eating, drinking, and dancing to a live band — with neither patrons, employees, nor band members wearing facial coverings. According to patrons, the gathering was a wedding reception, which would not have been allowed at this size under statewide COVID-19 regulations, which limit non-essential gatherings to 50 attendees. In “Red Zones,” non-essential gatherings are not allowed at all, regardless of size.