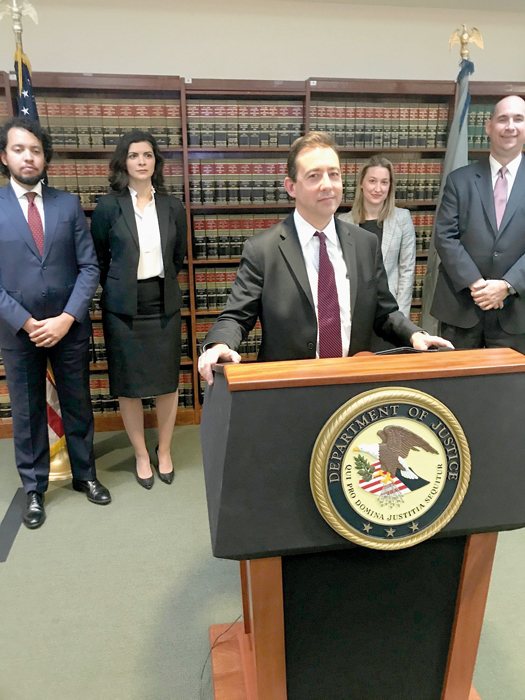 Photo Courtesy of the U.S. Attorney’s Office for the Eastern District of NY

“The United States will not tolerate the conduct of PRC carrying out state-authorized actions on U.S. soil without notice to, and coordination with, the appropriate U.S. authorities,” said Acting Brooklyn U.S. Attorney DuCharme.

Six defendants also face related charges of conspiring to commit interstate and international stalking. The defendants, allegedly acting at the direction and under the control of PRC government officials, conducted surveillance of and engaged in a campaign to harass, stalk and coerce certain residents of the United States to return to the PRC as part of a global, concerted and extralegal repatriation effort known as “Operation Fox Hunt,” officials noted.

According to the complaint, the defendants participated in an international campaign to threaten, harass, surveil and intimidate John Doe-1, a resident of New Jersey, and his family in order to force them to return to the PRC as part of an international effort by the PRC government known within the PRC as “Operation Fox Hunt” and “Operation Skynet.” In furtherance of the operation, the PRC government targets Chinese individuals living in foreign countries that the PRC government alleges have committed crimes under PRC law and seeks to repatriate them to the PRC to face charges. Rather than rely upon proper forms of international law enforcement cooperation, such as Interpol “red notices” and requests for information through appropriate governmental channels, the defendants allegedly engaged in clandestine, unsanctioned and illegal conduct within the United States and facilitated the travel of PRC government officials (“PRC Officials”) to U.S. soil in order to further carry out these illegal acts. Between 2016 and 2019, multiple PRC Officials directed the defendants, and several others, to engage in efforts to coerce the victims to return to the PRC.

“As alleged, the defendants assisted PRC officials in a scheme to coerce targeted individuals to return to the PRC against their will,” said Acting Brooklyn U.S. Attorney Seth DuCharme. “The United States will not tolerate the conduct of PRC carrying out state-authorized actions on U.S. soil without notice to, and coordination with, the appropriate U.S. authorities. Nor will we tolerate the unlawful harassment and stalking of U.S. residents to further PRC objectives.”