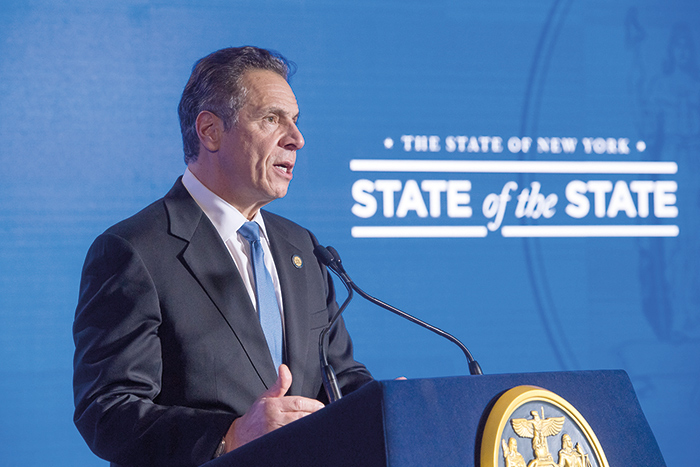 Gov. Cuomo delivered his 11th State of the State address this week.

Governor Andrew Cuomo this week delivered his 11th State of the State address, making headlines in the process.

Cuomo’s 2021 agenda–Reimagine | Rebuild | Renew—features a suite of initiatives to not only begin reopening New York as the state continues its work to defeat the COVID-19 virus, but also tackle critical issues facing New York and the country including jumpstarting New York’s economic recovery; creating a fairer, more just state; reopening the state; becoming a leader in the growing green energy economy; and rebuilding and strengthening New York’s infrastructure. In order to reopen New York, the Governor has put forth a number of proposals focused on finding creative ways to reopen New York and support businesses in a post-COVID world.

Among the “creative ways” to help the Empire State bounce back is mobile sports betting, Cuomo said.

“At a time when New York faces a historic budget deficit due to the COVID-19 pandemic, the current online sports wagering structure incentivizes a large segment of New York residents to travel out of state to make online sports wagers or continue to patronize black markets,” Cuomo said. “New York has the potential to be the largest sports wagering market in the United States, and by legalizing online sports betting we aim to keep millions of dollars in revenue here at home, which will only strengthen our ability to rebuild from the COVID-19 crisis.”

State Sen. Joe Addabbo. Jr. (D-Howard Beach), chairman of the Senate Standing Committee on Racing, Gaming and Wagering who has pushed for mobile sports betting in NY for years, said he was optimistic after listening to the governor’s remarks.

“It is encouraging to hear that Governor Cuomo will embrace mobile sports betting in his State of the State Address,” Addabbo said in a statement. “By legalizing mobile sports betting, New York will be able to reap the benefits of the economic gains it will create and help the state rebuild after the COVID-19 pandemic, in addition to increasing educational funding, addressing illegal activity in the state and assisting those with gaming addictions. I look forward to working with the Governor and his office to efficiently implement mobile sports betting for the people of New York.”

Other highlights of Cuomo’s State of the State address include:

Safely Bringing Back the Arts with Pop-Up Performances and Events: New York is the cultural capital of the world. Our unique cultural assets — Broadway, museums, film, comedy, dance, and music — are fundamental to both the economy and the spirit of New York. Before the COVID-19 pandemic, the $120 billion arts and cultural sector accounted for nearly eight percent of the state’s economy, and nearly 500,000 jobs. In less than a year, over two million jobs in the creative arts were lost nationally, including tens of thousands of jobs in New York.

New York State will launch a public-private partnership that will organize “pop-up” performances and arts events across the state beginning in February. More than 150 world-class artists including Amy Schumer, Chris Rock, Renée Fleming, Wynton Marsalis, and Hugh Jackman will participate, along with arts organizations such as the Ballet Hispanico, Ars Nova, the Albany Symphony Orchestra, the National Black Theatre, Pendragon Theatre in Saranac Lake, and many others supported by New York State Council on the Arts, which works with over 2,000 arts organizations across the state. 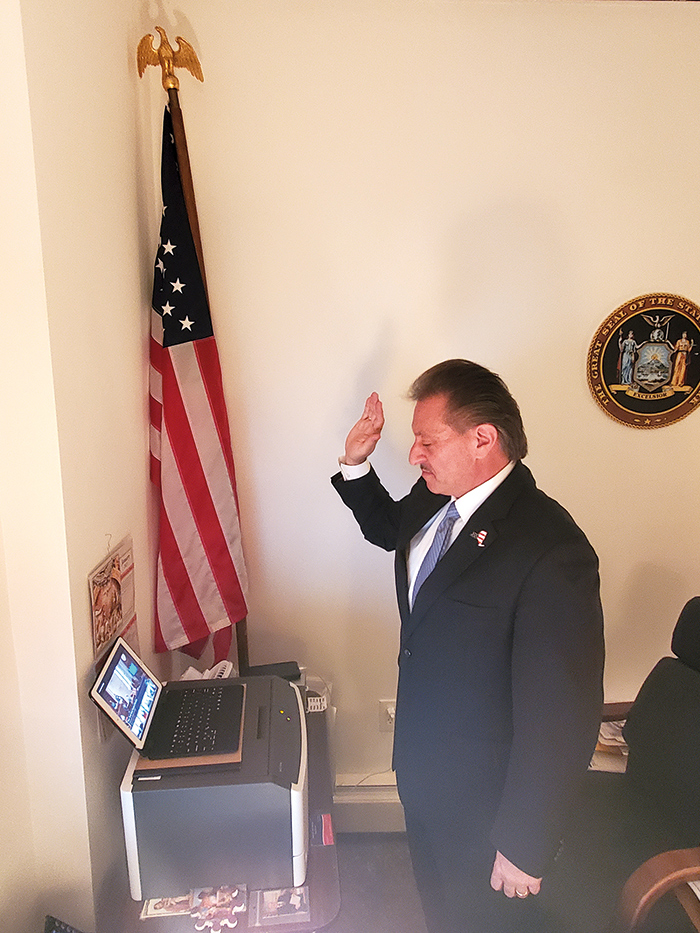 Photo Courtesy of Sen. Addabbo’s Office
“By legalizing mobile sports betting, New York will be able to reap the benefits of the economic gains it will create and help the state rebuild after the COVID-19 pandemic, in addition to increasing educational funding, addressing illegal activity in the state and assisting those with gaming addictions,” said State Sen. Joe Addabbo, Jr., seen here last week being virtually sworn in via Zoom for his 7th term representing the 15th District.

Supporting New York Artists through the Creatives Rebuild Initiative: The State will partner with The Andrew W. Mellon Foundation to launch a Creatives Rebuild initiative. Developed in partnership with the Reimagine New York Commission, this initiative will put back to work 1,000 artists who have been impacted by the crisis and will invest in dozens of small arts organizations that make our towns and cities so dynamic. Arts have a multiplying effect on the economy. Creatives Rebuild will provide New York artists support so they can help build more vibrant communities across New York.

Convene a Commission on the Future of New York’s Economy: Cuomo will establish the Commission on the Future of New York’s Economy to put forth a roadmap to address the underlying inequities exposed by the COVID-19 crisis, — including the socio-economic disparities that the crisis exacerbated — get New York back to work in jobs that pay well and continue to attract people from around the world to live and work in New York. The Commission will be composed of leading members of the nation’s academic, business, labor, and civil society leaders. NYU Wagner School of Public Service Dean Sherry Glied will serve as Executive Director of this Commission.

Create a Rapid Testing Network as a Tool to Help Businesses Reopen: Over the past several months, Cuomo’s New York Forward reopening plan has paved the way for many businesses to resume operations safely through a phased approach and in accordance with public health protocols. While this has unleashed the ingenuity and creativity of New York businesses — such as new outdoor dining spaces and delivery options — it has also created significant financial struggles for these industries.

Creatively Repurposing Underutilized Commercial Space for Additional Housing: As the COVID-19 pandemic has unfolded, New York, like many states across the country, has seen an increase in telework and a reduction in travel. New York City must, and will, remain a global commercial hub by ensuring that the City remains the paramount location for the world’s most innovative and successful businesses and their employees. Reduced demand for office and hotel space has created an opportunity to repurpose formerly commercial space that has far greater potential for use as housing, including affordable and supportive housing, to create dynamic, 24/7 walk-to-work neighborhoods.