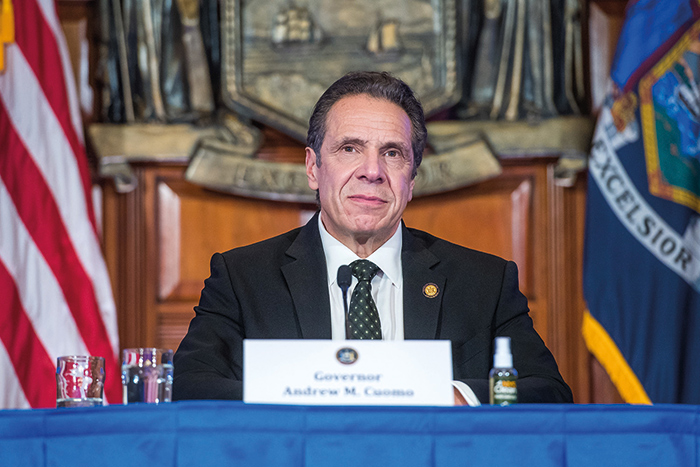 Photo Courtesy of Darren McGee/Office of the Governor

The State Legislature has voted in favor of legislation repealing the temporary emergency powers that the Legislature granted to Gov. Andrew Cuomo last year at the start of the COVID-19 pandemic.

The State Legislature on Friday voted in favor of legislation repealing the temporary emergency powers that the Legislature granted to Gov. Andrew Cuomo last year at the start of the COVID-19 pandemic.

The legislation revokes the governor’s authority to issue new directives while allowing those that are now enforced and that pertain to preserving public health to continue under significantly greater legislative oversight. This system restores the pre-existing balance of power, ensures genuine checks and balances even during a state of emergency, and mandates a better flow of information between the governor, the Legislature, and the State’s localities for the remainder of the pandemic, said State Senate Majority Leader Andrea Stewart-Cousins.

“I think everyone understands where we were back in March and where we are now. We certainly see the need for a quick response but also want to move toward a system of increased oversight and review. The public deserves to have checks and balances,” Stewart-Cousins added. “This legislation creates a system with increased input while at the same time ensuring New Yorkers continue to be protected.”

The law will establish new checks by the Legislature on the authority of the governor during the pandemic by:

“The details in the newest New York Times report, which was released March 4, highlight that Gov. Cuomo’s aides altered a New York State Health Department report on the number of deaths in nursing homes. If these actions are proven true by an independent investigation under the authority of the NYS Attorney General, it would be an egregious abuse of power that affected the lives of thousands of New Yorkers and their families,” State Sen. Joe Addabbo, Jr. (D-Howard Beach) said. “With New York administering the COVID vaccine, it is time that we strip Gov. Cuomo of the emergency powers that were granted at the start of the pandemic. That is why I am voting today to support Senate bill S.5357, which will do not only that, but allow for increased oversight and review of future governor’s proposals.”

Assembly Speaker Carl Heastie said, “By immediately repealing the temporary emergency powers, allowing no new directives to be issued and bringing transparency and oversight to the standing directives, we can establish better communication and collaboration with our local communities and help preserve the health and wellbeing of New Yorkers as we see the light at the end of the tunnel of this devastating and deadly healthcare crisis.”