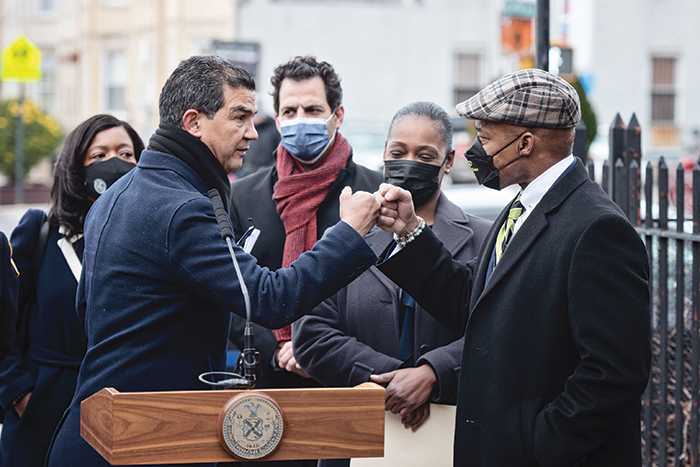 The investment will fill gaps in existing greenway routes in central Queens and along Brooklyn’s southwest shoreline, with a focus on connecting communities to New York City’s greater park system, Adams added.

The milestone investment in outer-borough greenways will fund a total of six projects in Brooklyn and Queens, led by Parks with on-street work by DOT. In Queens, projects will build new segments in Flushing Meadows Corona Park, Kissena Corridor Park, and Kissena Park, helping to close greenway gaps in neighborhoods that have been historically disconnected. In Brooklyn, work will improve access to the waterfront by building new greenway segments in Leif Ericson Park and reconstructing the existing greenway in part of Shore Road Park.

Full project details will be determined during the design process, where community members will have the chance to share additional input.

These projects were identified in the 2022 Destination: Greenways! study to improve and connect greenway segments within parks, making them both destinations and thoroughfares to increase access. As part of the study, Parks and DOT reviewed two routes in the city’s greenways network, held public meetings and engaged community stakeholders to determine key needs, and set priorities for new park amenities along each route. The studies were made possible with a $1 million grant through the Mayor’s Fund to Advance New York City from The Leona M. and Harry B. Helmsley Charitable Trust.

“Enhancing the greenway experience is a key initiative of DOT and our sister agencies — as we know cyclists especially love riding along their waterfronts and parks,” said DOT Commissioner Ydanis Rodriguez. “We know there is great demand for more and better connections to greenways. And we are proud to be working alongside Mayor Adams and Parks Commissioner [Sue] Donoghue to improve and finally connect existing greenways in central Queens and Brooklyn. Equity has been at the forefront of DOT’s decision making when it comes to expanding and improving the safety of all pedestrians and cyclists, and with the mayor’s steadfast support and funding, we can make accessing these beautiful greenways safer and more convenient for all.”

Expanding greenways has been a key priority for the City — there are now more than 150 miles of greenways throughout the five boroughs. Parks and DOT intend to expand the Destination: Greenways! model of determining greenway improvements to additional routes in other boroughs.

“Mayor Adams is creating a fantastic piece of green infrastructure for our city that will serve as an urban oasis for generations to come,” said Assemblywoman Jenifer Rajkumar (D-Woodhaven). “As someone whose district includes the Forest Park section of the greenways, I look forward to the day myself and my constituents can travel dozens and dozens of miles enjoying the beauty of nature.”