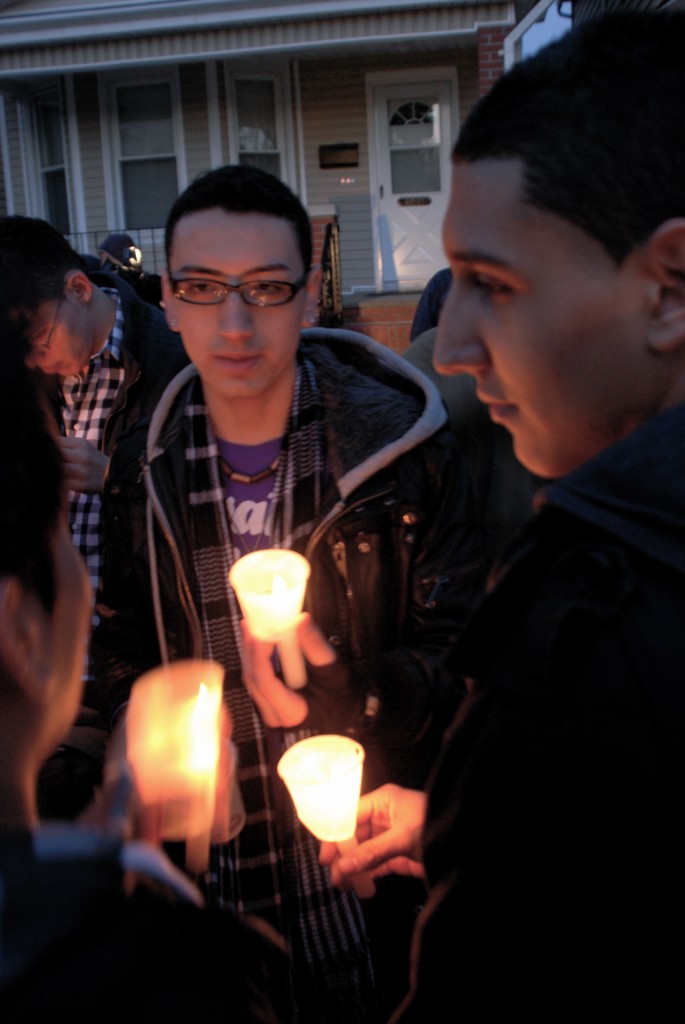 As neighbors peered out of second story windows, a candle-lit crowd circled on the corner of 90th Street and 89th Avenue in Woodhaven to mourn Anthony Collao and speak out against hate-driven violence.

Collao, 18, a former Woodhaven resident and recent high school graduate, was assaulted on March 12 after leaving a party in an abandoned home. He had suffered severe head trauma by the time police arrived. His attackers, five teens who had crashed the party yelling anti-gay slurs and breaking windows, were arrested shortly after the assault.

The vigil, planned as a sidewalk gathering where Collao was attacked—mere blocks from where he once lived—quickly outgrew its venue.

More than 50 people—family, friends, activists, politicians and neighbors, many with candles in white plastic cups—formed a circle in the road as speakers gave a somber reminder of the battle against bigotry in New York City.

Council Speaker Christine Quinn thanked Collao’s family for their strength and reiterated the theme hanging over the night: too often a community meets to mourn victims of hate.

“I can’t imagine how difficult it is to stand on the street where this horrible murder occurred, but you being here tonight gives all of us great strength as we move forward in our efforts to make sure that justice is brought to bear for Anthony, and also … that we don’t continue to have to do this over and over and over again,” Quinn said.

Deputy Director of the Anti-Violence Project Ejeris Dixon, one of the vigil’s organizers, thanked Collao’s family for allowing everyone to share their grief and said the growing attacks on gay youth are appalling.

“Anthony was an ally,” she said. “Anthony wasn’t afraid to have the courage to socialize and to stand up for his friends and that’s an everyday challenge we can all aspire to.”

Ecuadorian Ambassador to the United States Luis Gallegos spoke as well, highlighting the fact that Collao’s murder also plucked a nerve among immigrants and their children—Collao’s family is originally from Ecuador. Diego Sucuzhanay, an Ecuadorian who lives in Brooklyn, also attended the vigil for Collao. Sucuzhanay became a powerful voice in the anti-hate campaign after his brother Jose was murdered in Brooklyn on December 7, 2008. Jose was arm in arm with a friend when his attackers set on him shouting anti-gay and anti-Hispanic slurs.

While the speakers mourned Collao and decried hate, some in attendance reflected on the local problem surrounding the attack.

Vinny Oliveri, who’s lived on the block for seven years, hadn’t known about the vigil beforehand—few of the neighbors did. The night of the attack, he had heard some noise, but said he just assumed it was kids fighting again, something that happens “now and then.”

He said the neighborhood has changed, especially in the last three years.

“We used to argue about getting the park closed at night and getting better lighting, now they’re in abandoned houses,” he said. “It’s terrible what happened. A lot of the riffraff aren’t even from the neighborhood.”

Sandra Gold, a parent coordinator at Brooklyn Lab High School, said that many of her students, some from the neighborhood where Anthony was attacked, have been saying that he should have known better than to hang out at a “gay party.”

“[The talk among students] shows a growing disrespect; a life shouldn’t have to come to this. The kids give up in this neighborhood. They see these kids they think are cool, and it ends up like this,” she said, waving toward the circle of mourners.

Michael O’Nate stood stoically next to a photo of Collao after the vigil, speaking softly to friends and once leaning in to adjust windswept flowers. The night of the party, O’Nate had left early. He had work in the morning in Long Island. Staring into the dark street, O’Nate said he wasn’t around when the crashers arrived.

O’Nate met Collao three or four years ago, and almost immediately started calling him brother. The vigil, he said, was very respectful.

“That the community came together, it’s overwhelming,” he said quietly.

Collao’s family attended as well, but like his friends, did not speak to the crowd. His sister, Karen Collao, 14, told NBC News, “He was this person and you meet him and you’re like oh my God where have you been my whole entire life. He was that type of person.”