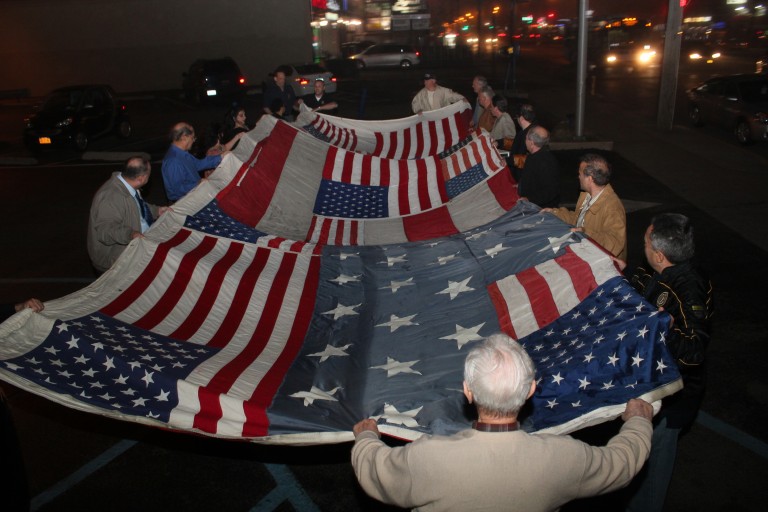 Firefighter Jimmy Sands gave a presentation about the 20 by 30 foot flag, which weighs 45 pounds, and was flown at 90 West Street, a few blocks south of the World Trade Center, and in the aftermath of the destruction, the flag was destroyed.

Now, the New York Says Thank You Foundation is taking the flag on a cross-country tour, hoping to restore the monument back to its 13-stripe format.

New York Says Thank You was founded in 2003 when five-year-old Evan Parness wanted to send toys to families in southern California who lost their homes during summer wildfires. FDNY members who heard about the effort were so moved they offered to drive to California themselves to deliver the toys.

Since then, the foundation helps those in need on the anniversary of 9/11. The foundation wishes to “pay back” the kindness New York received after 9/11.

The National 9/11 Flag has since become a major part of the foundation’s efforts. The flag was brought to Greensburg, Kansas, when New York Says Thank You helped rebuild homes destroyed by a tornado in 2008. Survivors re-stitched the flag with a mishmash of other flags.

After some contemplation, the foundation decided the flag should be restored to its original glory. To do so, it is getting patches from retired flags from all 50 states.

Sands, who works at Engine 331 on Crossbay Boulevard, explained the organization has already received many patches. One patch came from the remains of a flag that President Abraham Lincoln was lain on after his assassination. Another patch from Hawaii was sewn on by World War II veterans on Pearl Harbor Day.

“It was an unbelievable experience,” Sands said.

Sands joined the FDNY seven years ago, and early in his career, he was trapped on the 15th floor during the Deutsche Bank fire in 2007. He saw two fellow firefighters die that day, and since then, has dedicated his off-time to the foundation.

“I got very involved after that. It’s therapy for me,” Sands said.

The flag, which is never transported without an off-duty FDNY escort, is a symbol of the country’s restoration after the terrorist attacks, Sands said.

“We treat it like a newborn baby,” Sands joked.

Frances Scarantino, president of the South West Queens Rotary, is friends with Sands and invited him to speak after learning about the project on Facebook.

“It’s an amazing project. It’s uplifting and inspirational, and it makes me proud to be an American and proud to be a New Yorker,” Scarantino said.

The club members got together and presented the New York Says Thank You Foundation with a check for $250.

Rotary Club members also have other reasons to be inspired by the 9/11 flag and the patriots it represents. Jayne Wadhawan, a member since 2010, has a daughter serving in the Army.

“I’m personally honored to be here and part of the presentation,” Wadhawan said.

Her daughter Nikki joined the Army in 2006 when she was 19 years old. “Needless to say, I’m very proud of her,” Wadhawan said.

She stressed that it’s important to remember those serving abroad, especially with Memorial Day around the corner.

“Troops really look forward to mail and packages,” she said. Small goods that can be taken for granted like foot powder, Chap Stick and candy can brighten up soldiers’ days.

Scarantino said she is holding a collection drive at Reach for the STARS in Coleman Square, to send packages to the military overseas.

After the presentation, Sands let club members and visitor fold the flag outside. Howard Beach resident and World War II veteran Ernie Prete had the honor of making the final folds.

“I’ve folded many flags before for our country,” Prete said. “Never something this big though,” he added jokingly.