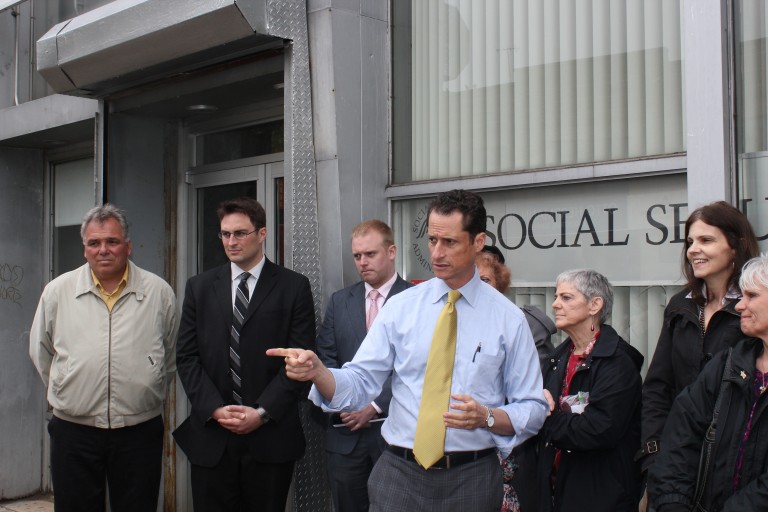 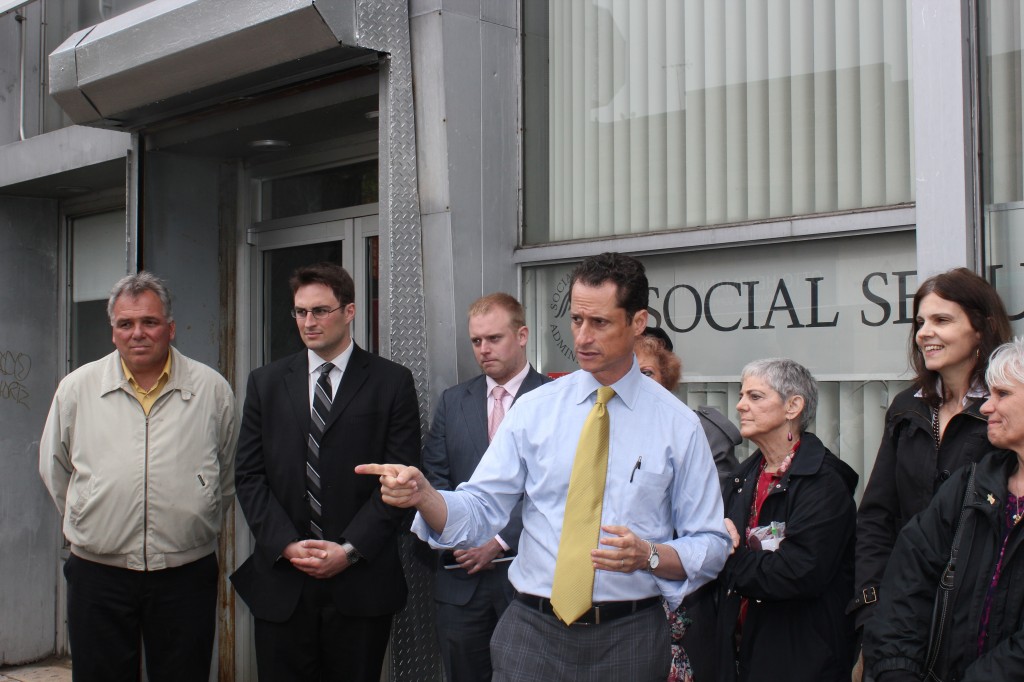 The growing senior population in central Queens is in danger of losing convenient access to a Social Security office.

The Social Security Administration (SSA) intends to close its office on Myrtle Avenue in Glendale this summer in an effort to save costs, but Congressmen Anthony Weiner and local residents say doing so would devastate the community. Weiner held a press conference on Tuesday outside the office at Myrtle Avenue and 67th Place to protest the close.

“This is simply unacceptable,” Weiner said. He noted that if the Glendale office were to close, residents would be forced to travel to Cypress Hills, Brooklyn or Rego Park. Worse, some residents who need essential services will stop applying for benefits, Weiner said.

Also, the latest census data showed that the number of people with disabilities and senior citizens in central Queens has increased over the last decace, which worries Weiner. “This could not come at a worse time,” he said.

Barbara Toscano, who deals with seniors every day as the Executive Director of the Peter Cardella Senior Center in Ridgewood, said the office was critical. “The seniors we serve really benefit,” Toscano said.

The Glendale office is centrally located within Community Board 5, making the office easily accessible for Middle Village, Maspeth, Glendale and Ridgewood residents. Vincent Arcuri, chair of the board, noted that half of the district’s population comprises senior citizens or low-income families, making the office vital for the area. While residents from Community Board 5 are closest to the office, residents from nearby neighborhoods of Woodhaven, Richmond Hill and Ozone Park may prefer to travel to Glendale in Queens, rather than travel to Brooklyn, which is their closest office.

The SSA said it had to make the “difficult decision” because of Congressional budget cuts, and all employees and workload will be transferred to the Rego Park office at 63-44 Austin Street. “The consolidation of these two offices and all their employees into existing leased office space near public transportation will have a projected cost savings of nearly $3 million over the next ten years,” SSA spokesman John Shallman said by e-mail. He also noted that many of the services provided by the office can be done online or by calling SSA’s toll free number at 800-722-1213.

Weiner, however said, “it’s not realistic” to believe everyone will be able to get to a computer to continue their benefits. Arcuri also challenged the simplicity of getting services through online forms.

“After three days of fighting on the internet [to apply for Social Security] I came here,” Arcuri said.

Weiner has reached out to the SSA and has proposed that if the office must close, the administration find a suitable replacement within Glendale to continue offering services.

For senior citizens like Memi Wildgruber, the Glendale office has been very helpful. “I find it very convenient. I can’t see them closing. It’s uncalled for,” she said.