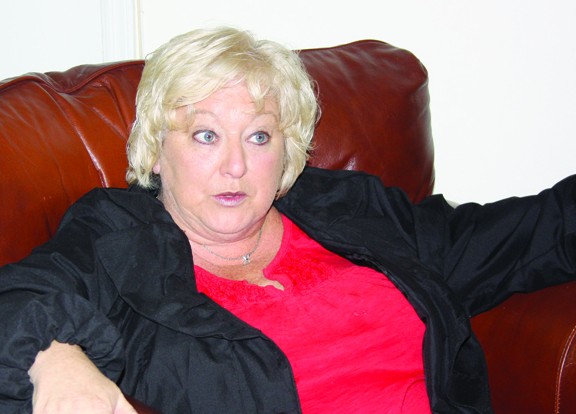 Barbara Sheehan is awaiting trial in the February 18, 2008 shooting death of her husband, former NYPD Sgt. Raymond Sheehan. She has admitted to killing him in self-defense, following a long history of his repeated, brutal battering of her, his constant threats to her life, her family and her children and his illicit sexual interactions with transsexual and transvestite prostitutes.

Justice is in trouble. At least that’s how Barbara Sheehan sees it. The woman who picked up her husband’s gun and emptied its chambers while he shaved says that the last three years leading up to her impending  murder trial have been laden with a whole new form of victimization than what she endured while her husband was still alive and battering her. And she says it comes from the people’s representative in the case—the office of Queens District Attorney Richard Brown.

When asked what things are like now, a pensive Sheehan looks off as she delivers an answer. “I have come to believe that what he [my husband ] told me was true – ‘police and lawmakers stick together. They will lie and people will believe them.’”

Sheehan is referring to accusations made by Assistant District Attorney Debra Pomodore and Donna Aldea to Justice Arthur Cooperman about alleged misconduct of the defense counsel Michael Dowd, during a court ruled psychiatric evaluation on July 28, 2009.

On July 30, 2009, Aldea told the court that Dowd frequently interrupted or disturbed Sheehan’s psychiatric evaluation two days earlier by rearranging the room, conferring with his client and interrupting the psychiatrist’s questions. Aldea said that during a break, Dowd yelled at the psychiatrist and the prosecutors. “He was screaming, he was very hostile, very aggressive and very unprofessional … in front of his client.” According to Aldea’s testimony, Dowd’s outbursts made Sheehan very uncooperative and hostile, which ultimately led the DA’s office to file a motion arguing her right to psychiatric evaluation should be withdrawn.

Based solely on those accusations, and without viewing a videotape of the session, Justice Cooperman ruled to prohibit the defense from using expert testimony to explain long term abuse, thereby neutralizing any possibility of presenting an effective battered woman’s defense. Shortly after, Cooperman retired from the bench.

According to Sheehan’s defense attorney Michael Dowd, there is finally a small but much-deserved break in the case. “After a year and a half we were able to get the actual videotapes of the examination which includes audible voice and proves that all the accusations were false. Not because of Michael Dowd saying so. This is what is shown by the videotapes. It isn’t even a close call. They [the ADA’s] made false statements. At this point, those false statements have caused Barbara Sheehan to be in a position to not have a fair trial.”

Now the wait begins again for Sheehan­­, who is due back in court on July 12th. Dowd says he expects the trial to begin shortly after Labor Day.

Asked how the last few years have affected her, Barbara Sheehan said, “You can’t really move forward with your life. Everything goes on around you. My daughter finished school and got married, my son just graduated from college and I am still standing in what seems like mud. There are days that I feel I want to just stay under the blankets because I just can’t go any further.”

The bigger picture however – not living in the shadow of the fear of her husband is described very simply by Sheehan. “It’s unbelievable different.” And the most remarkable difference seems to come in the simplest of areas. “When he was alive, you were afraid to fall asleep.  It’s funny though because sleep was your only safe zone. Now it’s easier to fall asleep, and better to wake up.”

Considering the angst and outrage that Sheehan has dealt with over the preclusion order that paralyzed her defense, she says she has emerged stronger and ready to face the future no matter what it holds.

Sheehan admits she is glad the truth about the Assistant District Attorneys’ accusations came out in the videotapes, but remains cautiously optimistic. “Nothing is really a victory – it’s a little smile on your face. Think about how many lives have been changed and altered by this. I feel glad, but certainly, I didn’t win anything yet,” she said.

Now Sheehan says what she most wants is to get the trial behind her and hopefully move on to help others affected by domestic violence. When asked if she’s ready to go to jail Sheehan says, “No. And I don’t deserve to go to jail. But if that’s what it is, then that’s what it is. It’s time to end all this. It will still mean my children are safer. My family is safer.”

Barbara Sheehan ends the interview with one final thought: “The world is safer.”