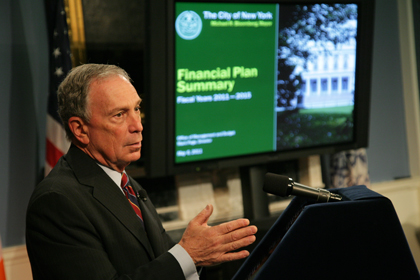 When Governor Andrew Cuomo passed the state budget earlier this spring, there were massive cuts to education and social services. While there was a smattering of complaints—notably from senior centers facing closure—most people understood hard decisions had to be made due to the state’s terrible fiscal situation.

When Mayor Michael Bloomberg presented his executive budget, proposing familiar cuts to firehouses, libraries and social services, criticism began pouring in from all corners of the city.

These are not hypocritical reactions. There are several key differences between Cuomo and Bloomberg’s position. First, Cuomo and the state were facing a severe budget deficit—close to $9 billion. The city, on the other hand, is in a better fiscal shape with a projected $3 billion surplus for this fiscal year.

To be fair, the term surplus is a bit misleading, and the city has agreed to use some of its projected surplus for educational needs. The city is required by law to pass a balanced budget or risk a state takeover. This forces the administration to always keep extra money just in case it’s needed.

Either way, the appearance of a surplus has been a public relations disaster for Bloomberg. The United Federation of Teachers has been paying for several advertisements that lambast the administration for laying off teachers while sitting on a surplus.

Another sore point for city residents is how cuts were made. Cuomo went to great lengths to say that part of the cuts include curbing government spending and creating a more efficient government. But Bloomberg has made no strides to reform the city government. Rather, he made what seems like arbitrary cuts to vital city services.

And there are simple things the city can do to fix its fiscal problems. Most notably, the city has a shocking, abhorrent consultant problem. This week, another consultant from the city Department of Education was charged with financial fraud. According to Manhattan Borough President Scott Stringer, the DOE has spent nearly $1 billion in consultants. Maybe some of that money could have been used to offset education cuts.

The city has lost millions over the last few years due to shoddy consultants. The most notable is the CityTime scandal, which cost the city hundreds of millions of dollars. Meanwhile, Bloomberg is proposing firehouse closures to save the city $55 million. The math simply does not add up.

New Yorkers showed that they understood hard choices have to be made in budget choices. But we all should stand up and fight against Bloomberg’s cuts to our essential services. Firehouses are important. Libraries are important. Teachers are important. If the Mayor thinks he can convince people these cuts are necessary, that there are no other ways to find that money through city waste, he is fighting a losing battle.