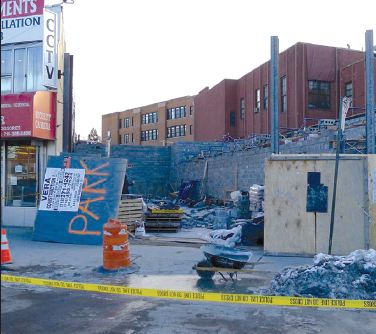 Three Queens contractors were fined last month by the U.S. Department of Labor for alleged willful, repeat and serious violation of workplace safety standards, which left one worker dead and three others injured in January. One contractor is contesting the charges, while the other two have settled for significantly reduced fines.

On January 10, an 18-foot high wall at a construction site at 84-16 Queens Boulevard, in Elmhurst collapsed. Hedilberto Sanchez was crushed in the collapse and suffered a fatal heart attack at the hospital; his brother Miguel was one of the three injured and was released the next day. Sanchez, an illegal immigrant who lived with three of his brothers and their families in a small Queens apartment, also left behind three children.

The wall collapsed while being reinforced with cement, most likely because it lacked an adequate support structure.

“It was absolutely terrible,” witness Jim Demetrio said to CBS just after the incident. “The workers were trapped and other workers were trying to get them out.”

A stop work order was immediately issued by the city and the federal Department of Labor’s Occupational Safety and Health Administration (OSHA) launched an investigation. On July 14, the OHSA cited Sing Da Corp, H Rock Corp and Vera Construction for intentionally disregarding the law with indifference to worker safety.

“This was a tragic incident that could have been avoided,” Kay Gee, OHSA’s area director in Manhattan, said in a statement.

According to OHSA spokesperson John Chavez, Sing Da Corp is contesting the charges, while H Rock and Vera Construction have both set up payment plans. For accepting the citations, H Rock Corp was given a 30 percent reduction in its fines; Vera Construction’s fine was reduced by 50 percent, he said.

“Putting the lives of workers at stake on worksites is totally unacceptable,” said Councilwoman Karen Koslowitz, a long-time advocate for worker safety. “Workplace safety should be paramount at any job site in New York City. I will be looking at ways in the council that we can strengthen worker safety by getting tougher on repeat offenders who violate New York City’s building code.”

The Sanchez brothers had been subcontracted by one of the companies to work at the site, but at the center of the tragedy was notorious Queens developer Tommy Huang.

Huang built his first five-family home in Flushing in 1979, and quickly rose to be one of the area’s leading developers. In 1986, he spent $3.4 million on the RKO Keith’s Theater, announced plans for a shopping mall, hotel and movie house, then spent the next four years on a slow demolition. In 1990, the city revoked his permits when the theater’s landmark staircase was razed. Then a fire started in the locked building—an arson that was never solved.

Huang was later charged for allowing 10,000 gallons of heating oil to leak into the building. He pleaded guilty in 1997, was fined $500,000, sentenced to five years’ probation and ordered to clean the spill.

In 1999, the State Attorney General sued Huang for irregularities at a Flushing housing complex and Huang was forbidden to sell condos and co-ops in New York, but he wasn’t banned from development.

In 2002, he sold the RKO for $12.1 million—a nearly 400 percent profit—and his building projects continued.

A new controversy arose when Huang demolished a garage on Mazeau Street in Maspeth, without a permit—he simply applied after the fact and his demolition application was approved. The DOB also issued permits to subdivide the lot, for a construction fence and for a new three-story building. Completely disregarding the zoning code, Huang nearly completed construction of a four-story building.

In 2008, a stop work order on the Mazeau Street site was temporarily lifted so Huang could remove the building’s fourth floor.

After the latest incident, Avella renewed his fight against the Huangs. “Mr. Huang’s unsafe construction practices date back almost twenty years,” Avella said in January, “and his projects continue to receive numerous violations … which often have resulted in destruction of adjoining properties and danger to public safety.”

At least two lawsuits are pending against Huang, and the construction site where Sanchez lost his life has dozens of open violations and more complaints. The latest complaint—issued in May—contests that construction at 84-16 Queens Boulevard has damaged the foundation of an adjacent building.

Currently, a partial stop work order has been issued for the site, but it’s one of many in a long line of violations. Huang has a history of non-compliance, and he continues to operate his development company.

According to the OSHA, the three contractors were fined more than $116,000.

Sing Da Corp was fined $42,000 for failing to brace the wall, and $21,000 for five scaffold-related safety violations.

Vera Construction was cited for several violations as well, amounting to $15,312.

Huang’s H Rock Corp was cited for failing to brace the wall, several scaffold violations, as well as uncovered floor holes and a complete lack of a safety program. The fines total $38,000.

The contractors had 15 working days after being notified of the citation to contest the charges, pay the fines in full or set up a payment plan.

In accordance with their payment plans, Vera Construction will pay roughly $7,600, H Rock Corp will pay $26,600. Sing Da Corp is contesting the citation.