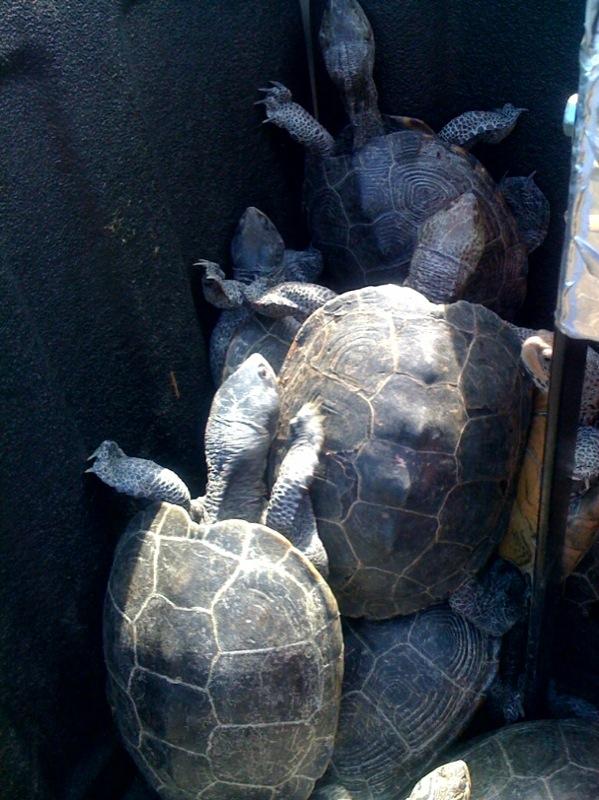 Last Wednesday, several flights leaving Kennedy International Airport were delayed when a runway was overtaken by hundreds of turtles.

The turtles, diamondback terrapins, live in Jamaica Bay and cross JFK Airport every year around the end of June, during mating season. The turtles leave the bay for the beach, where they lay their eggs—it just so happens that the airport is in their way.

Kennedy Airport is already staffed with environmental specialists from the Port Authority of New York and New Jersey, whose job is to deal with the wildlife that shares airspace and runways with commuters. On June 29, at about 10 a.m., roughly 100 of the diamondbacks were collected and moved safely off the runway.

The turtles were first spotted by pilots in the morning, but air-traffic controllers couldn’t spot them from the tower.

“Be advised 30 feet into the takeoff roll, left side of the centerline, there’s another turtle,” said the pilot of American Airlines Flight 1009, to the control tower as he took off for the Dominican Republic.

“There’s another one on the runway?” asked the air-traffic controller.

“Uh, well he was there,” the pilot replied.

While birds are the number one wildlife hazard for flights out of JFK Airport—the yearly culling of geese is often carried out as a flight safety issue—turtles have never caused flight damage, said the FAA.

The turtles, once they were removed to safety, proceeded with their egg-laying ritual. Flights resumed after only 30 minutes of delay; most outbound planes had been diverted to other, clear, runways.

Jet Blue has been dealing with the airport turtles for years, they first wrote a Twitter message about an encounter in 2009. In a blog post on the Jet Blue website, they offered an alternative reason for the runway invasion: “Turtle leaves the comfort of his home in Jamaica Bay in search of a much-needed vacation.”