Maspeth residents had a message Tuesday morning for the suspected drunken driver who killed a local bar owner earlier this month: “Peter Rodriguez, if you’re watching, you have destroyed us inside and out. … You may be able to run, but you cannot hide for long because we will find you.”

Those were the words of Bernadette Gibbons, the youngest sister of 37-year-old George Gibbons, a beloved Maspeth bar owner killed two 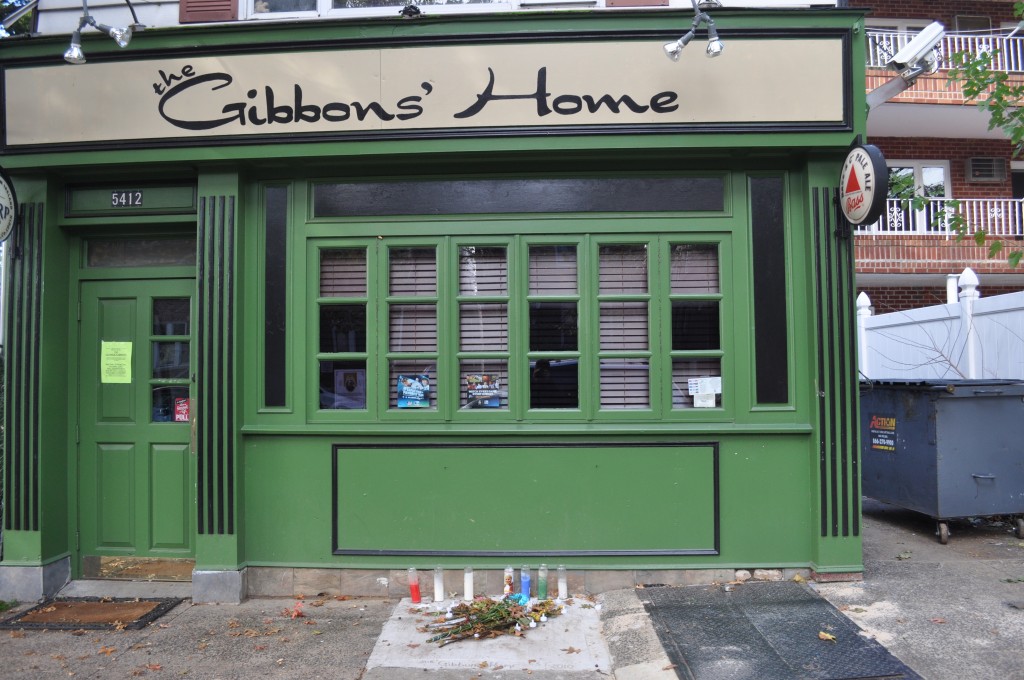 weeks ago in a head-on collision on his way home after work.

Local politicians and the Gibbons family announced Tuesday that the community was offering at least $10,000 for information leading to the arrest of 36-year-old Rodriguez.

After closing his bar, Gibbons’ Home, early Saturday morning on October 15, George Gibbons was riding in the back of a livery cab on the Long Island Expressway service road near 58th Street. A Chrysler Sebring going the wrong direction struck the cab, killing Gibbons, and injuring the cab driver and a passenger in the Sebring. The driver of the Sebring, who police later identified as Rodriguez, fled the scene.

Police have searched multiple previous addresses of Rodriguez including one in Brooklyn, but have yet to find him. After a week passed with no arrest, a frustrated community started raising money for a reward.

“Over the past few weeks, more people than I could count have come out in support and in remembering George Gibbons,” said Councilwoman Elizabeth Crowley. “Maspeth was the town that George loved so well, and we’re here to tell George and give this message to the public that we loved him back.”

George Gibbons’ sibling described him as a fixture in the community. He DJ’d local parties and opened his bar at 54-12 69th Street just this year. Two blocks up from the press conference Tuesday, Gibbons’ Home was empty and dark; half-burnt candles stood on the sidewalk outside the front door where a makeshift memorial was constructed.

About 50 people gathered Tuesday morning to hear the announcement of the reward. Bernadette Gibbons expressed the family’s thanks and praised the support of the Maspeth community through this difficult time.

“I want to thank them all from the bottom of my heart. The outpouring of love and support over the last couple of weeks has been so comforting.”  She said her family has become accustomed to the support, “For George especially, he touched so many people and was always there to help out, so I’m just so glad that everyone is returning the favor for him.” Gibbons sister said more than 4,000 people attended his wake.

Congressman Joe Crowley, a friend of the Gibbons family, urged the driver to surrender and added $4,000 to the growing reward money.

“The crime that took place — the manslaughter that took place — is only exacerbated now by the flight,” Crowley stated. “If [Rodriguez] is smart, he’ll turn himself in. But if he’s not, I believe that this reward will go a long way toward the apprehension and capture of this individual who took such a great life at such an early age.”

Crowley’s money was added to $2,000 from NYPD Crimestoppers and $4,000 in community donations, bringing the reward total to $10,000 thus far. Donations are being accepted at Maspeth Town Hall for the Gibbons Reward Fund.

Anyone with information about Rodriguez is urged to call 1-800-577-TIPS.