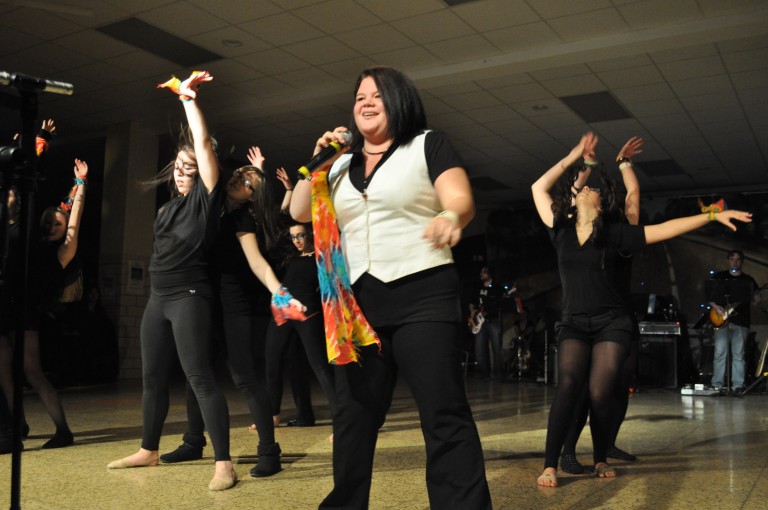 Soccorsa Concordia (middle) sings “Come Together” during The Beatles musical performed by the Christ the King High School Musical Theatre group on Saturday night. Many of the songs were choreographed to include dancers.

After four months of rehearsing each song and dance routine, the Christ the King Musical Theatre group’s hard work paid off as it presented “The Beatles –A Musical Revue” last weekend.

The three shows, which were held at Christ the King High School last Friday, Saturday and Sunday, featured two hours of classic Beatles songs spanning their entire discography. The group performed 34 songs divided into two sets with a short intermission in between.

According to John Bellington, co-director of the musical, the reason they chose to do a Beatles show this year was to change things up from the usual Broadway-type shows that they normally do. He noted that the performers and the audience were more into the show this year, perhaps because of the familiarity of the songs.

Although the show took many hours and days to prepare for, Bellington said that the hardest part was choosing what songs would ultimately end up on the show’s set list. They had to fit a certain number of songs into two hours and that led to some songs being left out of the show, including “Eleanor Rigby”, which is one of most well-known Beatles songs.

“That was days of arguing,” said Bellington of leaving that song out of the show.

Accompanied by a band, featuring theatre group director and show co-director Heather Arzberger, the musical had many of the students perform the songs either as a group with a dance routine or solo with the rest of the cast watching. Among the songs that were in the show included “Blackbird”, “Let It Be”, “Come Together” and “Hey Jude.”

Bellington also got a chance to take the stage. He, along with Frank DeBiase, who also served as a director of the musical, performed the song “When I’m 64” together during the show’s second act.

In what originally started as a joke, Belling- ton said that he decided to sing that song as part of the show after being encouraged by his wife and the students in the theatre group. Their performance featured the two singing while being rolled around in a wheelchair, as theatre members danced behind them.

Bellington, who hadn’t performed on stage in 20 years before last weekend, said that he wanted to make sure their portion of the show was entertaining for both the audience and the performers.

“We had to make it funny or forget about it,” Bellington said. “Serious it was never going to be.”

Although most of the group are looking forward to returning in the spring semester, the same isn’t true for Travis Verbil, who performed his last show with the group last Sunday.

Verbil, a senior who lives in Maspeth, said that he’s leaving the theatre group to concentrate more on his rock band, Wes Mantooth, which is named after actor Vince Vaughn’s character in the movie “Anchorman: The Legend of Ron Burgundy.”

Verbil said that it will be difficult to leave the theatre group behind but feels that it’s the best decision for him right now.

“It’s really bittersweet,” said Verbil, who sang “Rocky Raccoon” during the show and played the ukulele for a few songs. “I’m going to miss working with my friends.”

“He’s great backstage and he’s great with the kids,” said Bellington, who also teaches history at the school. He added that he tried to convince Verbil to come back for his last semester, but with his band and the honors classes that he’s in, Bellington understands why he would leave the group.

Christ the King HS Principal Peter Mannarino, speaking after Saturday’s show, made sure to mention Verbil’s departure to the audience. He walked up to the front and the crowd gave Verbil a standing ovation.

“Travis will always be a character,” Mannarino said.

The Theatre Group’s next production will be a performance of the musical “Pippin”, which is set to show on Apr. 27th through the 29th and May 4th through the 6th.