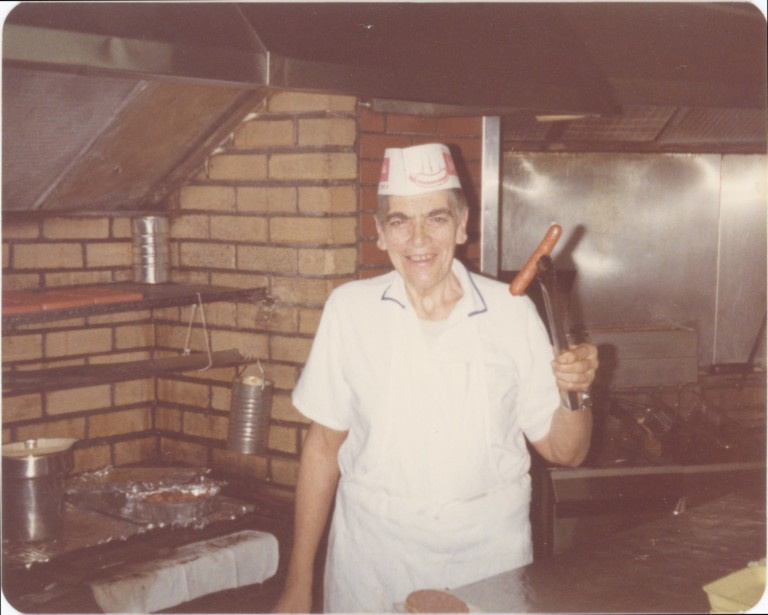 So, how popular was the famous Big Bow Wow restaurant in Howard Beach back in its golden years?

Popular enough that not even a fire on the premises could make people standing in line for the iconic local eatery’s sandwiches leave their places.

Tony “Bow Wow” Giampietro, 79, the assistant manager of the now-closed restaurant, can still remember it like it was yesterday.

“It was during the 1970s,” he said, with a laugh as he recalled the incident. “And there was a grease fire in the building. And you would have thought that they [the customers] would have left, but, no, they were still on line. They didn’t want to leave.”

Local politicians such as the late city Councilman Walter Ward would stop for one of their 65-cent roast beef sandwiches while discussing political matters. Sanitation workers and police officers would stop by for breakfast or lunch before working hectic shifts. Teens gathered from around the area to chow down on 35-cent hot dogs at the place that became known as the ‘hot spot’ around the neighborhood. Families brought their children to enjoy the game machines and rides at the restaurant’s game room. At some points, neighborhood gangs such as local street racers—or ‘hot rods’—tried to make the eatery their headquarters, only to be chased out by police.

Even a celebrity or two would walk in every now and then, such as former New York Yankees All-Star outfielder Joe Pepitone.

“I remember one day, I was talking with him when he came into the restaurant,” Giampietro, a longtime Mets fan, said. “But I didn’t know who he was. So, I asked him, ‘What do you do for a living?’ He said, ‘I play baseball.’ I said, ‘For who?’ He said, ‘the Yankees.’ That’s when I realized ‘Wow, it’s Joe Pepitone!’”

The hustle and bustle of busy throngs of crowds during the spring and summer while overseeing a staff of around 35 people—60 during the summer— that churned out pizza, clams, hamburgers, seafood, sandwiches, fries and other goods was a far cry from the life at an insurance company that Giampietro, then 25, worked at while splitting his time studying at Pace University in the city and waiting on tables at the Bow Wow in 1956.

While the job paid well, Giampietro actually turned down a higher salary offer from his insurance employer to take a job as the assistant manager of the Big Bow Wow in 1957.

“I loved the excitement of it,” he explained. “I wasn’t making a lot of money, but I fell in love with it, so I had to do it.”

Even through the busy nights and endless orders during the high peak of the restaurant in his 22 years at the Big Bow Wow, Giampietro never regretted it for an instant.

And the Big Bow Wow could be very busy, sometimes drawing more than $6,000 a day.

“Sometimes we would have to have emergency supplies delivered on Sunday because Friday and Saturday were so busy,” the assistant manager recalled. “The lines [during business hours] would be there for hours; sometimes, I would be opening clams for eight or nine hours myself.”

However, for Giampietro, the real joy came from a simpler thing—working with the youths that he employed.

A former Korean War veteran, the assistant manager ran a tight ship. “I’m an old Army guy, so we had to look a certain way, clean cut. No mustaches, no long hair,” he said.

Despite the strict rules and the busy workload, however, employees found a way to unwind and grow closer after hours, playing basketball at nearby Our Lady of Grace church until the early morning, going to New York Mets games, and sometimes even spending Christmas with the Giampietro family.

“They were good kids,” the assistant manager said of his crew. “A lot of them spent more time at the restaurant than at their own homes.”

With so much of his life invested in the restaurant, Giampietro—who left in 1979 following an ownership change—said he was deeply saddened when the restaurant closed in 1983, to be replaced by a shopping center.

However, the group still gets together annually for reunions.

Bank vice presidents, policemen, business owners, lawyers, plumbers, and sanitation workers—those are just a few of the jobs that Big Bow Wow’s former staff has gone on to since leaving the restaurant’s bustling doors.

“It is something, thinking back to when they were just kids in school, looking for a job, and seeing them grow and turn into great men and women,” Giampietro said. “I’m very proud of them, and glad if I was able to help out in some way.”

The feeling is more than mutual from his former employees.

Frank Ferrara, who worked at the Big Bow Wow from June 1968 until January 1980, remembered walking to Bow Wow to meet Tony in June of 1968, at the time in high school and in need of work.

“I was in high school and needed a job to save for college, a car, and Yankee and Beach Boy tickets,” Ferrara said. “When I left in 1980 I was already teaching for six years.”

Ferrara, who works as a special education teacher at Nassau BOCES, said working at the eatery helped make his dream of becoming a teacher possible.

“At Bow Wow, I learned the character building and leadership skills that I continue to use today, at age 60, in the classroom,” he said. “This was made possible through the leadership and guidance of the Bow Wow managers Tony Giampietro, Ed Martano, Vinnie, Sophie, and later Ralph Prisco.

“[Giampietro] was there for us as we were growing into adulthood and through the example he set every day we have grown into successful fathers, mothers, husbands, wives, firemen,teachers, businessmen, lawyers, and policemen,” Ferrara added.