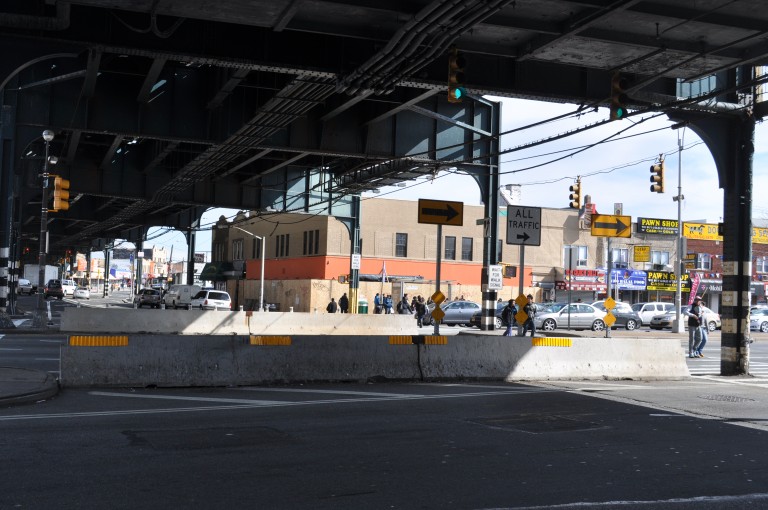 With one traffic change already in the books, a local politician has shifted his attention to another transportation issue.

State Senator Joe Addabbo (D-Howard Beach) is asking the Department of Transportation (DOT) to remove the traffic barrier on Liberty Avenue that prevents people driving on Cross Bay Boulevard from turning onto that avenue.

This comes after news came out last week that DOT changed parking regulations on the north side of Rockaway Boulevard between Cross Bay and Liberty avenues. It removed a rush hour regulation and a no standing sign and extended the metered parking hours.

Now Addabbo says that he wants to remove the barrier because, although it was put in about two years ago to improve driver and
pedestrian safety, it has affected the businesses directly behind it, causing those places to lose customers and some to even close down. Addabbo said that he wants to work with the DOT on keeping that area safe for pedestrians and drivers while keeping those

“I was never happy with what the DOT did, respectfully,” Addabbo said. “Those stores have suffered.”

The store owners affected by the barrier backed Addabbo’s thoughts.

According to Fabian Niaupari, owner of Terranova Bakery at 93-14 Liberty Ave., business at his store has decreased about 30 to 40 percent since the barrier was put in place. He’s had to lay off two employees as well.

Niaupari said that the main reason for business being down is that there is less traffic coming and going on the block that they’re on. He also said that it used to be convenient for people to park, grab something to eat or drink, then leave. Now, drivers can no longer do that as the area behind the barrier was converted to a back-in parking street only.

“They say to me ‘I don’t have the time to stop and then make a right on Cross Bay, go three blocks down and come back,” said Niaupari, referring to conversations he’s had with customers who don’t frequent the bakery anymore.

Kimberly Liverpool, the manager of Tommy’s Pizzeria and Restaurant next door to the bakery, said that she had to let go of a few workers as well.

She said she agrees the barrier should be removed because it has lived out its purpose.

Betty Bratton, chairwoman of Community Board 10, said that the board met with DOT regarding that area and they
discussed a plan that DOT is looking into.

According to Bratton, the community board devised a plan that would hope to improve business for the storefronts and keep that area safe for pedestrians and drivers. The plan would be to eliminate the back-in parking on the block directly behind the barrier and convert 93rd Street between Liberty Avenue and Cross Bay Boulevard back into a two-way street. Currently it’s a northbound one-way street.

Bratton said that this plan might be able to meet the concerns of the business owners and  residents who travel in that area. This plan includes keeping the barrier where it is.

“Even if it’s not a full solution, it might make it more convenient for the customers to go to those stores,” Bratton said.

A DOT spokesman said that the barrier has resulted in a reduction of accidents and it will not be removed. He said that the DOT will continue to look at the area for possible adjustments.