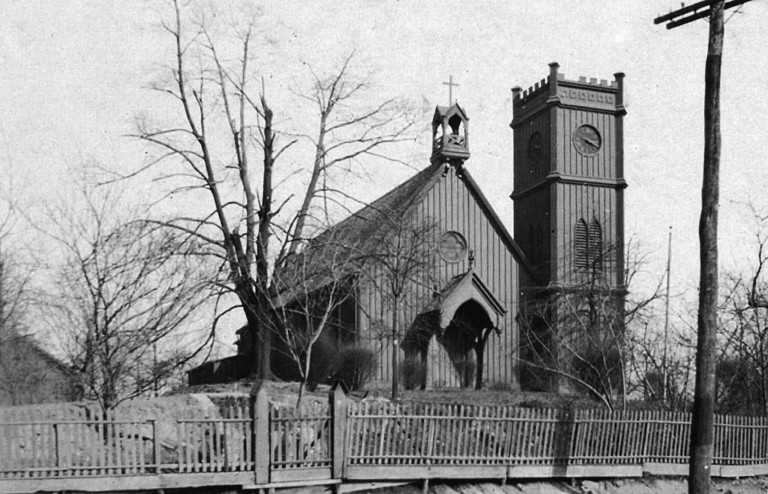 St. Saviour’s Church originally stood on a hill in Maspeth.

A landmark without a home now doesn’t even have a temporary home.

St. Saviour’s Church, a historical building that civic leaders saved from demolition, is deconstructed and in storage. Activists have dreams of rebuilding it at a new site, but for now, it needs to find a new holding tank before it finds a permanent site.

Galasso Trucking has stored the labeled beams and pieces in warehouses in west Maspeth. But now they need the room back.

For decades, the 1847 Carpenter Gothic church stood on a hill on Rust Street in Maspeth. When the owners decided to redevelop the property, Juniper Park Civic Association (JPCA) leadership convinced the owner to let them disassemble the building and find new land for it.

In the meantime, they labeled the pieces of the building and stored it in two trailers.

Those trailers have sat on Galasso Trucking’s property for more than three years now.

JPCA President Bob Holden led the charge to save St. Saviour’s from the wrecking ball in 2008. He said he was thankful for what Galasso has done, but he’s now in a bind.

“The owner certainly has been most gracious,” said Holden, president of the JPCA and Save St. Saviour’s Inc—an organization formed to take donations on the church’s behalf.

He and other advocates have been holding out for parkland to rebuild the church.

But in November, the Parks Department dropped a bid to acquire the church’s original site.

Funding from Councilwoman Elizabeth Crowley and Queens Borough President Helen Marshall was subsequently reallocated in an effort to buy a smaller swath of parkland at Martin Luther School in Maspeth.

While the land process is in limbo, the church has to go somewhere.

All Faith’s Cemetery in Middle Village has donated land to host the church—rebuilt or in pieces. The only thing keeping Holden from taking the trailers there is funds.

“There’s lots of little things that need to happen that have been stalled because of the money,” Holden said.

An estimate done on the patch by 69th Street and Juniper Valley Road reported it would cost $43,000 to clear the land. There’s also a $25,000 price tag to build a garage to hold the trailers.

Almost double that amount of money is supposedly available for the project—just not yet.

Former state Senator Serphin Maltese gave the project a $100,000 grant in 2008, and State Assemblyman Andrew Hevesi kicked in another $50,000 grant in the same year.

But they’re still weaving their way through state approvals.

Because his predecessor made the promise, state Senator Joe Addabbo is now working as a messenger between Holden and the state’s finance authorities.

Addabbo said the money is still there but it’s just winding its way through a politicized approval and allocation process.

“It’s unfortunate,” he said. “Sometimes, the monies going to our communities are part of a political game.”

He said he would keep trying to push the money out to St. Saviour’s. Holden was more hopeful about the grant from Hevesi, but there’s no date on the horizon when the money could be available.

A spokesman for Hevesi said they are working with the JCPA and Save St. Saviors to get paperwork pushed through as fast as they can.

The $50,000 from Hevesi won’t even cover the assessed cost of storing the church though, let alone rebuilding it there or elsewhere.

“We need both grants in order to bring the church over,” Holden said.

Regardless, it’s next to impossible that they could have the money within the next two weeks, which is when Galasso would like its space back.

Holden said Galasso had been extremely patient, but there’s no way that deadline could be met.

For now, the historical building is still stuck in trailers and in limbo.