Through the open gate on Cypress Avenue, trash and graffiti litter an abandoned building where squatters make their home. Forum Newsgroup photo by Jeremiah Dobruck.

René Zupancic lives in fear of her neighbors.

“They throw everything out on the roof or out those windows. They throw used sanitary napkins along the road over here. They scream; they yell. They beat a dog up really really bad one time. They’re heroin users,” she said. “It’s terrible.”

On Cypress Avenue in Ridgewood, Zupancic and her brother live next door to an abandoned three-story building that a group of eight to 12 young squatters have claimed as their own.

For more than a year, she’s been forced to tolerate illegal neighbors who fight, drink, smell, shoot up and generally terrorize the neighborhood, she said.

Recently it’s gotten worse, she said, with the squatters getting more violent and rowdy, doing things like throwing a car mirror into oncoming traffic or abusing animals.

In desperation, Zupancic is reaching out to the local community board and anyone else who will listen. 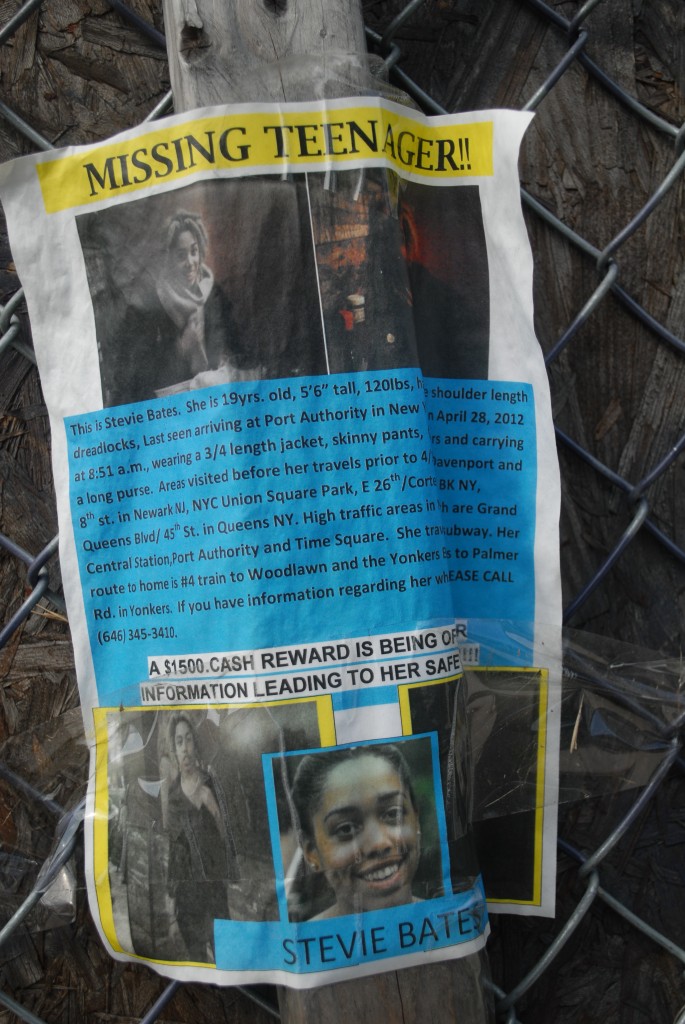 Every few feet there is a sign posted for this missing woman. A neighbor says she’s worried there could be more in the group that’s claimed the abandoned building as their own. Forum Newsgroup photo by Jeremiah Dobruck.

The building is on Cypress near the Jackie Robinson Parkway. According to Buildings Department records, it’s owned by PSCH—a nonprofit that provides services to clients with developmental, psychological and behavioral disabilities.

The property also has a stop-work order on it for open violations, including leaving it open and unlocked for anyone to access.

On Tuesday, the front gate on Cypress was hanging open. Trash was littered around the building and alcohol bottles lined the windowsills.

PSCH did not return calls for comment about the property on Wednesday, but the vagrant problem is well known to the local community board.

He said he’s been successful at getting police out to the property when he’s called about it, but that doesn’t solve the problem of the squatters showing up after dark and leaving before dawn.

He’s heard tales of unwanted guests wandering around with needles hanging out of their arms, and Zupancic said the problem has gotten worse in the last year.

She’s worried about her own property and safety, but also the wellbeing of kids she sees wander in and out of the building.

“Some of the girls look all of 13, 14 years old,” Zupancic said. “What if they’re missing children? Nobody is checking it out. That’s a big concern of mine being that I’m a mom.”

Someone other than Zupancic has thought of that possibility. Along the plywood and chain-link fencing surrounding the building, there are flyers every few feet offering a reward for a missing 19-year-old woman.

In the photos, she’s smiling and well-dressed—a stark contrast to whom Zupancic says she sees on the property.

“This one girl, she was down there by the deli, all of 14 years old. She had sores everywhere—filthy, filthy,” Zupancic said.

Giordano said PSCH has abandoned the building and is in the process of getting it demolished but is held up in housing court.

Even if it were down tomorrow, it’s taken too long, Zupancic said.

“We want the building down. It’s up there 10 years too long. Nothing is being done. It’s an eyesore. It’s degrading the value of our property value. It’s terrible,” Zupancic said. “My brother pays his taxes. He’s a law-abiding citizen, and he’s got to live like this? We want it down.”