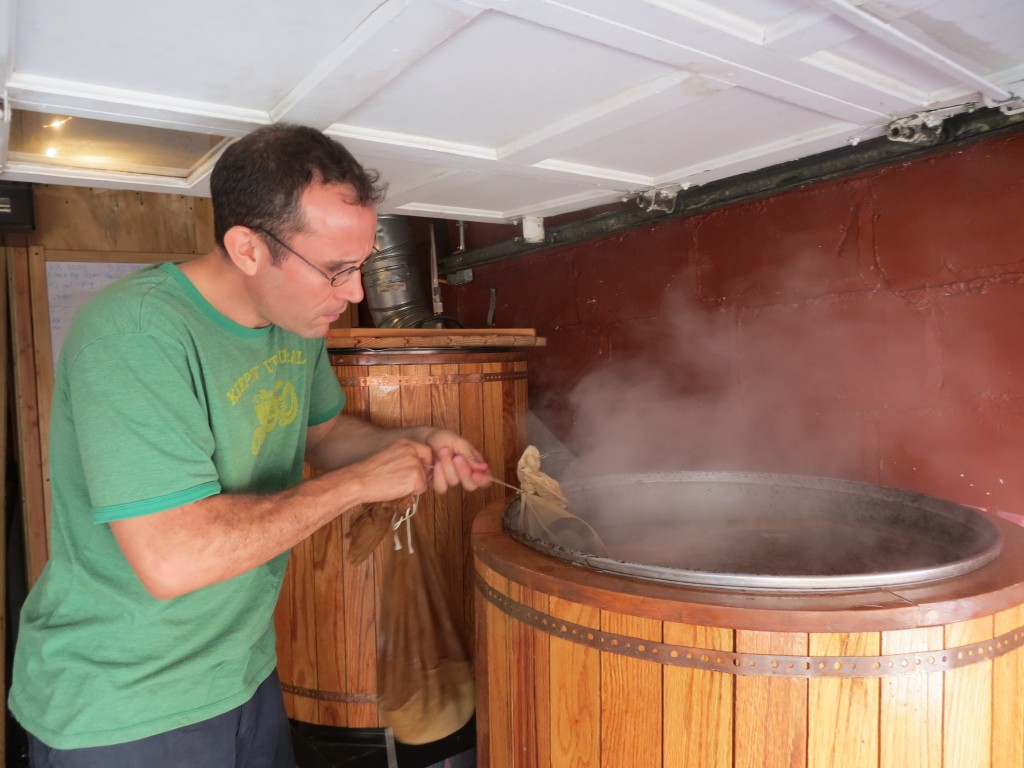 Steam rising around his head, Bridge and Tunnel Brewery owner Rich Castagna leans over an oak barrel perched outside the Maspeth home where grew up and works furiously on what will soon become a chipotle porter headed for two Astoria restaurants and a joint in Manhattan.

“Sorry, it gets a little hectic at the end of the brewing process,” Castagna says hours after he first began making the beer, named “Pickin’ Up the Change,” before dawn last Thursday. “This is going to be a good one.”

It has been exactly a year since Castagna got a license, on Sept. 12, 2012, to sell the drinks that the home brewer turned brewery owner has been perfecting for about a decade – and since then, restaurants and bars around the city, from shops along Steinway Street in Astoria to hubs along Manhattan’s Broadway, have begun lining up to sell everything from Castagna’s “Angry AmelDunkelweizen” to the “OlGilmartin Milk and Oatmeal Stout.” 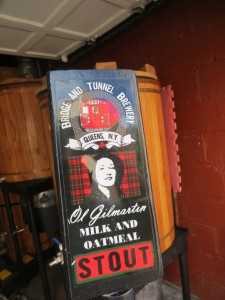 The Ol Gilmartin Milk and Oatmeal Stout is named for Rich Castagna’s mother as a tribute to someone who he described as strong, stoic and a constant source of encouragement in his life.

“I grew up in Queens, and I feel like there are a lot of stories about this place that are disappearing forever – I want what I do to reflect Queens and the outer boroughs,” said Castagna, who built his own nano-scale micro-brewery outside his home in Maspeth – including barrels made with oak flooring from his neighbors. “There’s a story behind each of my beers’ names. I named my first beer, the Ol Gilmartin Milk and Oatmeal Stout, after my mom, who was going to be my partner in the brewery, and the Dunkelweisen was named after a neighbor of ours who had a colorful personality.”

Reminiscent of conversations that come from sitting around and drinking in off-the-beaten-path bars, the stories behind Castagna’s brews are, indeed, reminders of the borough’s – and city’s – long and colorful past, filled with everyday people who could regale you with incredible tales that, hopefully, will live on in such drinks as the “Slaughterhouse Stampede Black Rye IPA” and the “Red Bird Express Belgian Red IPA.”

“I had a family member who was born in 1916 in Red Hook, when it was called the Brooklyn Navy Yard, and there used to be slaughterhouses there,” he said, explaining the name’s origin. “Ships would bring cattle in these vessels, and when they came off the boats, they’d go wild. They’d stampede down the cobblestone streets, and he told me people would have to duck into doorways to get out of their way.”

As for the Red Bird Express? That one’s named for the old Red Bird 7 trains that once ran on the elevated line through Long Island City, Sunnyside, Woodside, Jackson Heights, Corona, and Flushing.

“They were the lifeline for Queens; people really loved them,” Castagna said of the trains that inspired his logo’s centerpiece.

Rich Castagna and his wife, Lisa, with their three daughters, Hailey, left, Mia, and Samara.

Beginning his fascination with brewing about 10 years ago, after his friend suggested he do so, Castagna – who once owned a clothing business in Seoul, South Korea and now works full-time at a shipping company in New Jersey – fell in love with brewing after he began it as a hobby about 10 years ago. He and his wife, Lisa, who grew up in the Forest Hills/Rego Park area, were involved in the local brewing scene when they lived in Long Island City after getting married, and, ultimately, he and his mother decided they wanted to run a brewery together. However, she died about two years ago – which is when Castagna moved with his wife and three daughters – Mia, now 7 years old, and twins Samara and Hailey, now 5 years old – back to the Maspeth house where he grew up. From that house, he has launched a business that has really taken off – and he’s provided beer in places like Jimmy’s No. 43 in the East Village, the Queens Kickshaw in Astoria, MP Taverna in Astoria, Brouwerij Lane in Greenpoint, Brooklyn, Beer Street in East Williamsburg, and Astoria Bier and Cheese in Astoria.

Still, despite the success, Castagna said he doesn’t plan on brewing full-time – he wants to ensure that his passion remains just that: something he loves, and doesn’t have to depend on for income.

“Because it doesn’t have to support my family, I can let it grow organically and be creative,” he said. “I love it.”