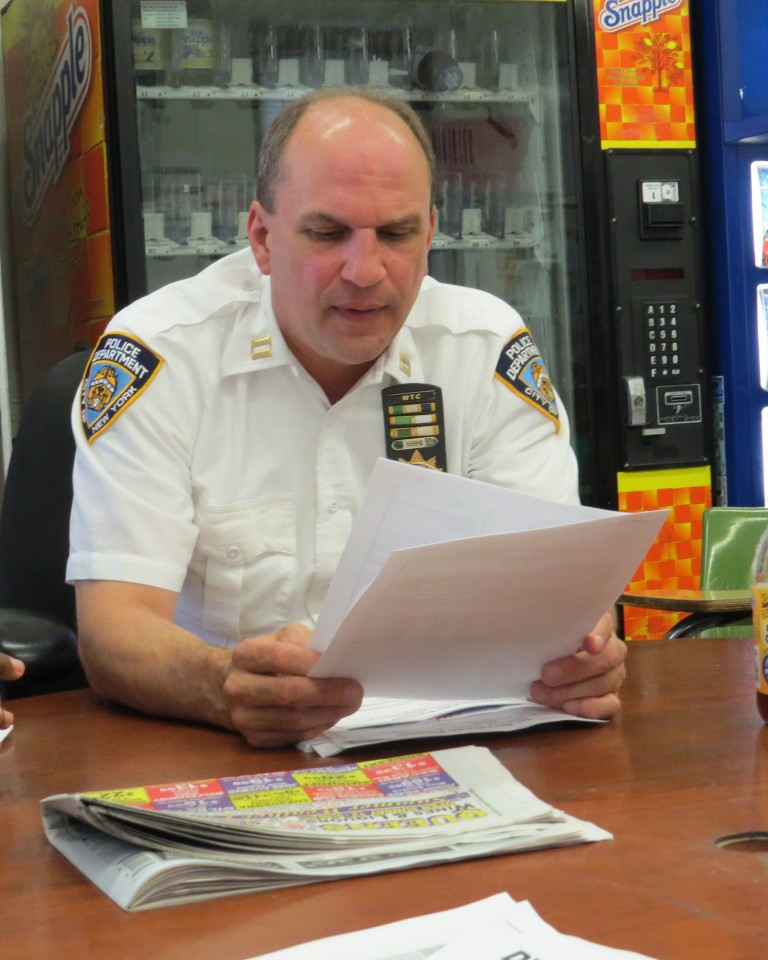 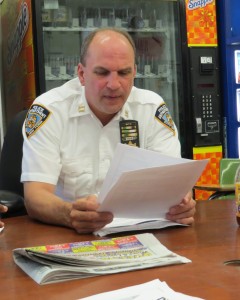 Police from the 104th Precinct urged residents, especially women, to be extra vigilant following a series of knifepoint robberies. Residents who have concerns about crime in the area can meet Capt. Christopher Manson, pictured here, at the next 104th Precinct Community Council meeting on March 18. File photo

A string of knifepoint robberies throughout Ridgewood have put the 104th Precinct on top alert – and women should be the most cautious, the NYPD said.

A spokesman for the precinct that covers Ridgewood, Glendale, Middle Village and Maspeth said two men have been targeting women, specifically between the hours of 3 p.m. and midnight, and attacking them with what appears to be kitchen knives. There have yet to be any injuries reported, but the suspects remained at large, the NYPD said.

Police described the suspects as white or Hispanic men, with one standing about 5-foot-4 and the other much taller, around 6-feet. In all instances, cops said they followed their victims down the street, possibly wearing something to cover their faces, and attacking women from behind.

“Please be alert of surroundings at all times,” 104th Detective Thomas Bell wrote.

Major felony crime is down slightly this year, dropping about 3 percent from what it was at the same time in 2013. Rapes, robberies, felony assaults, and burglaries have all decreased, while grand larceny and grand larceny auto has risen. There have been 76 reports of grand larceny, compared to 71 last year, representing a 7 percent increase. Grand larceny auto reports have seen the largest jump, going from 17 at this time last year to 24 this year – a 41 percent spike.

The precinct asked anyone with information about the incidents or suspects to call the 104th at 718-386-3004.

Anyone who has questions, comments or concerns about crime and quality of life issues in the precinct can meet Capt. Christopher Manson, commanding officer of the 104th, and other police at the 104th Precinct Council meeting on March 18 at 7 p.m. at Christ the King High School at 68-02 Metropolitan Ave. in Middle Village.