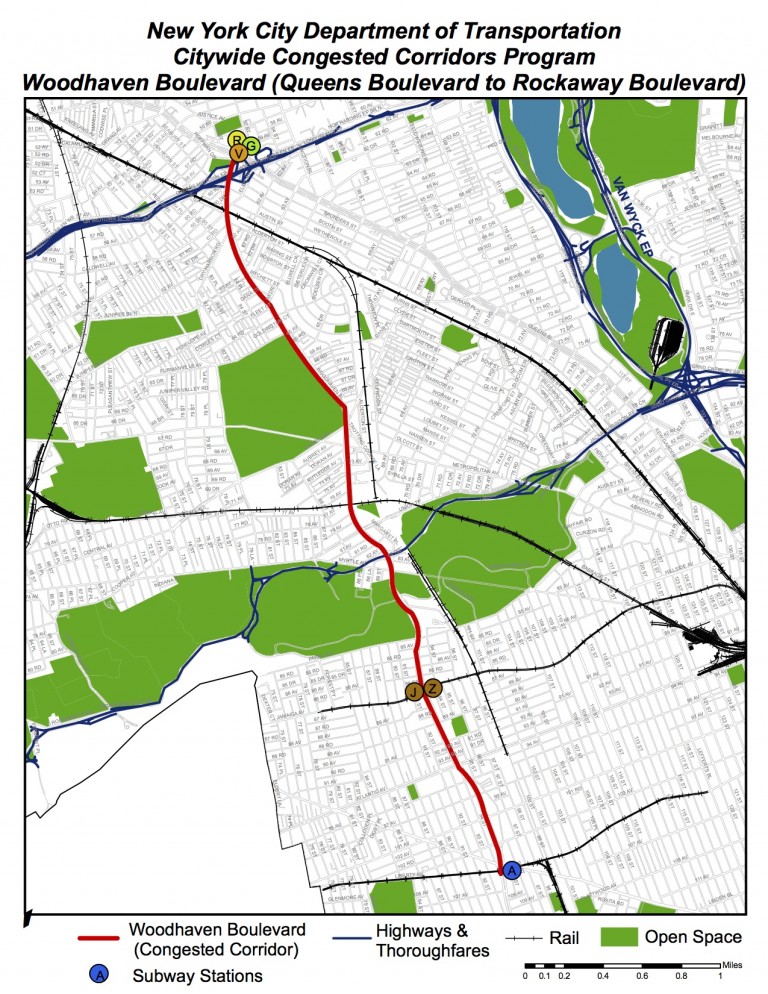 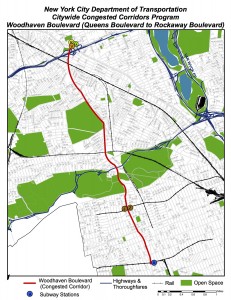 The city is studying how to alleviate traffic congestion on Woodhaven Boulevard from Queens Boulevard to Rockaway Boulevard. Image courtesy the city Department of Transportation

In an effort to make Woodhaven Boulevard – one of Queens’ most dangerous and congested roads – safer, the city Department of Transportation has been studying the major corridor for years but just reached out to community leaders who use the road daily to better assess what changes need to be implemented.

A spokeswoman for the DOT said the city gathered the Metropolitan Transportation Authority and representatives from community boards 5, 6, 9 and 10 to discuss “select bus service” – a city program launched in 2008 that aims to decrease congestion and travel time by allowing riders to pay off-board and creating bus-only lanes – on the busy boulevard. It was a positive discussion focused on safer streets, cleaner air, better quality of life and better traffic flow that will soon be opened up to the public, according to the city.

“This kick-off discussion was well received by all the attendees,” the DOT spokeswoman said. “We now are working to schedule a larger public meeting in April to gather more input on ways to improve bus service and the use of the corridor for all street users.”

Some of the city’s long-term goals for the boulevard include increasing the speed of bus service by at least 15 percent and growing ridership between 5 and 10 percent, the DOT said. The details were a welcome shift in the discussion that has been ongoing for years, CB 6 District Manager Frank Gulluscio said.

“The bottom line is that they want to get more input from the local community now from the people who live up and down the corridor so that whatever they are planning to do, everyone is on board with it,” he said. “They are opening up the lines of communication, and that certainly helps.”

Gulluscio said he was pleased with the city’s receptiveness to ideas from community leaders because everyone has the same goals in mind: shoring up pedestrian safety and reducing the volume of traffic along the corridor.

Early data the city released found that travel time along the busy boulevard ran anywhere from 10 to 20 minutes in either direction on any given day with an average speed between 10 and 20 miles an hour.

The city has been tracking the number of reportable accidents along the busy corridor, with more than 100 reported on average every year. In the year since Feb. 1, 2012, the city recorded 293 total crashes – 46 of which resulted in injuries.

“It is a much-needed study – long overdue,” Gulluscio said.

The city set out to address congestion on Woodhaven Boulevard as early as 2009, and the DOT said the process has taken a lot of time because of its intricacy.

Woodhaven Boulevard, which runs for 3.2 miles from north to south from Queens Boulevard to the intersection of Liberty Avenue and Rockaway Boulevard, has a variety of different land uses from heavy shopping districts to residential developments and parks. The entire length of the boulevard is a local truck route and runs through heavy truck route intersections, including Metropolitan Avenue and Union Turnpike.

Some improvements already under the DOT’s belt included a curb extension on the southern part of the boulevard and some median widening at different portions of the route as well.

The ongoing series of city sit-downs should continue next month, the DOT said, with a broader meeting being scheduled with the greater western Queens community.