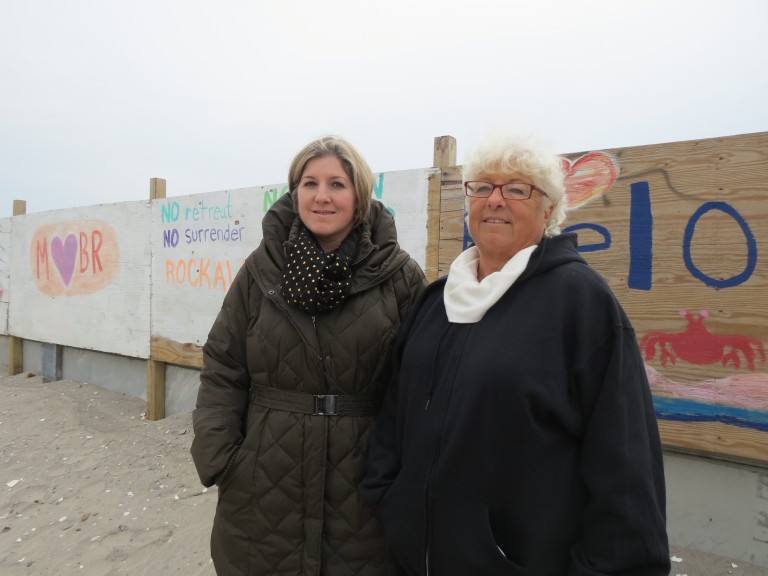 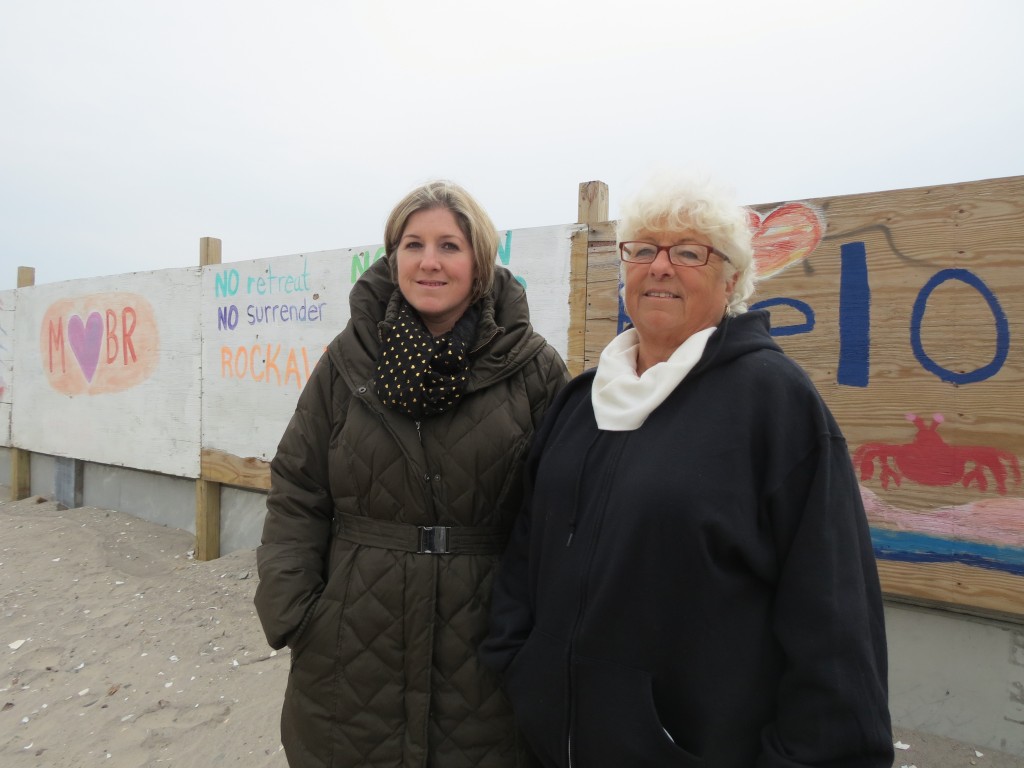 Christine Schneider, left, and Leslie Mahoney stand before signs in the yard of their Belle Harbor home created after Hurricane Sandy. Photo by Anna Gustafson

Leslie Mahoney and her daughter, Christine Schneider, can recall decades of memories on Beach 131st Street in Belle Harbor: The Fourth of July parties, the neighborhood friends running to each other’s houses for dinner, the adults sipping schnapps while overlooking the ocean that is essentially their backyard.

And while the ocean is, of course, still there, its waves constantly lapping against the now cold sand, there is a relatively recent addition to the backyard that is a reminder of how drastically life changed following Hurricane Sandy: Wooden panels painted after the storm with such messages as “No retreat, not now. No surrender, not ever. Rockaway forever” and “Thank you to all who have helped.”

When talking to Mahoney and Schneider, they will say that time and again: We could not have made it without the help of others.

“We wouldn’t be here without the volunteers,” said Mahoney, a retired public school teacher who has lived on Beach 131st Street since 1975.

“We were all out here, digging the house out of the sand, and I realized I was next to Murphy Brown – you know, Candice Bergen. And I said, ‘Oh hi Candice,’ and I kept shoveling,” Mahoney laughed.

But, in contrast to the massive outpouring of support, everyone from neighbors to superstars and people who trekked from across the country to lend a hand, Mahoney and Schneider have, like countless others affected by Sandy, said there has been a devastating lack of help from the government, including the city’s Build It Back program. The city has received hundreds of millions of dollars – $648 million has been allocated, to be exact – from the federal government specifically to help residents rebuild after Sandy – but few struggling to piece together their lives have seen a dime from it. 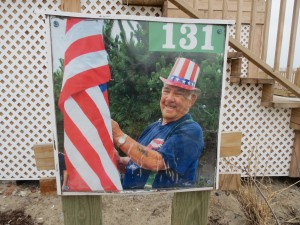 Harold Peters, a residents of Beach 131st Street in Belle Harbor for decades, would raise an American flag on his street every day for 30 years – a move that is emblematic of the kind of dedication residents said people have to the neighborhood. Such commitment, they said, has inspired them to keep fighting for their area after Hurricane Sandy devastated it – and now that the city has left them feeling abandoned. Photo by Anna Gustafson

“Because I’m a teacher, and my husband’s a teacher, we apparently make too much money and have been dropped to the last priority level for Build It Back,” Schneider said. “That means we don’t know when we would get anything – if we ever do.”

During Sandy, Schneider’s multi-family home – where she lives with her husband, children, elderly uncle and other family members – was devastated, and the damage, she said, was so bad that when an inspector for the Federal Emergency Management Agency arrived at her house not long after Sandy “stood in my driveway and cried.”

Following the hurricane, Schneider was living in a one-bedroom apartment with her two children while her mother stayed in their house to ward off looters – during which time she was still paying for a mortgage on her destroyed home. Since the storm, she and her family have had to shell out thousands upon thousands of dollars to rebuild.

After such a financial hit, she was hoping there would be some help from the city officials who promised aid would come – but it never has, and she’s not holding out much hope.

Still, U.S. Sen. Chuck Schumer (D-NY) promised Monday during a press conference about flood insurance legislation near Schneider’s house in Belle Harbor, said he would pressure the city to quickly dispense the millions of dollars he fought to bring to New Yorkers.

“We’re going to try with this new mayor to make it better,” Schumer said.

Besides being mired in red tape, the city’s Sandy aid program has taken a hit recently with the resignation of the head of Build It Back, Kathryn Mallon, in February, who had gained the respect of Queens civic leaders and elected officials. The de Blasio administration has not yet replaced her, though officials have said a Sandy plan is expected to be announced soon.

Whatever happens at the city level, Mahoney and Schneider hope it translates to the kind of life they once knew: A world where Mahoney’s father, Harold Peters, a longtime fixture on Beach 131st Street before his death a couple years ago, would march down the street every day for 30 years to raise an American flag.

It is, the two said, a place everyone on the street loves. And a place for which they will keep fighting.