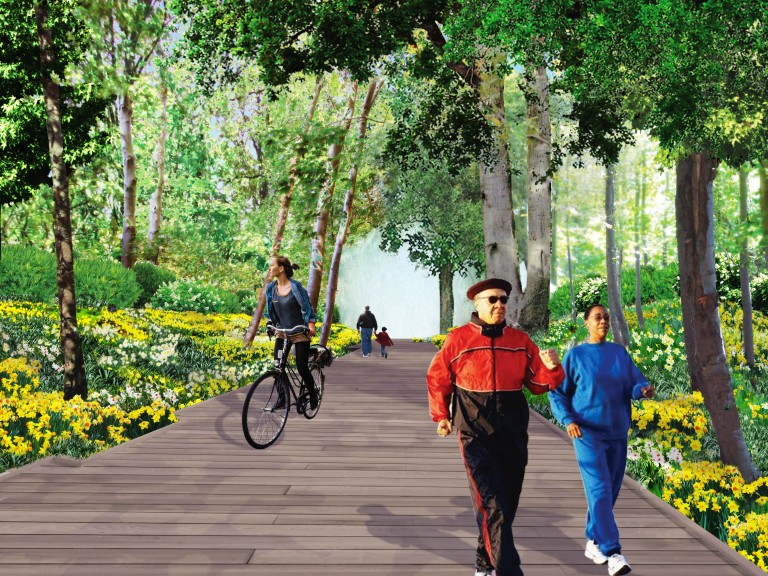 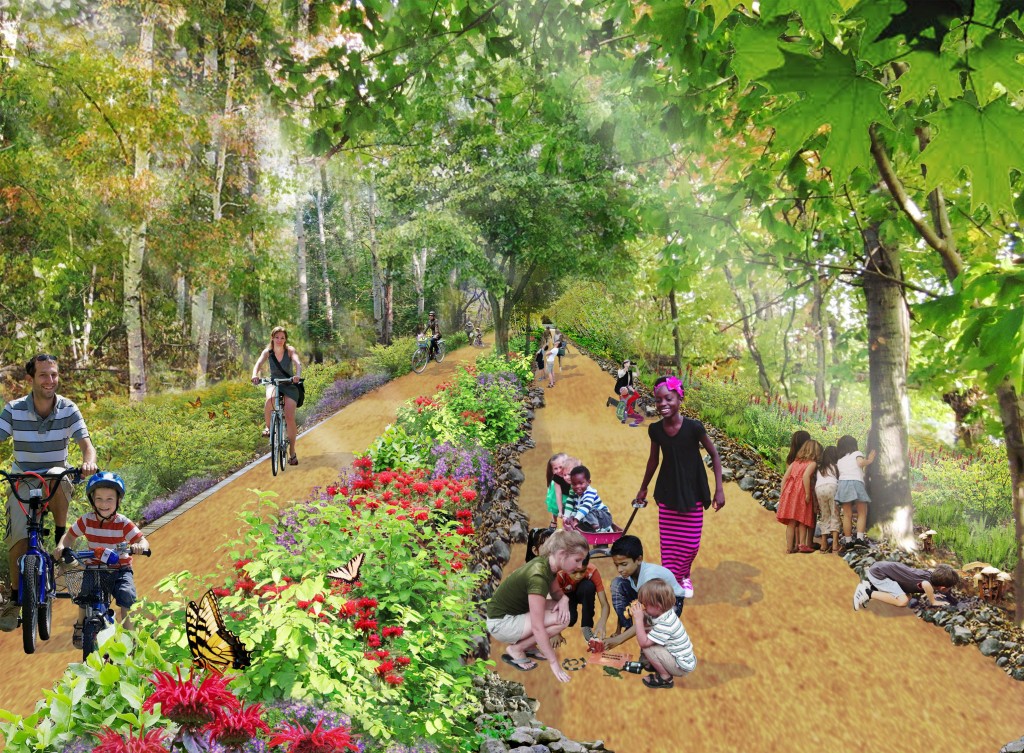 Friends of the QueensWay and the Trust for Public Land recently unveiled preliminary design concepts that will be presented at upcoming community workshops. Renderings courtesy Friends of QueensWay

The Friends of the QueensWay and the Trust for Public Land rolled out a new series of design concepts in anticipation of the group’s upcoming public workshops in Forest Hills and Richmond Hill.

The group announced its second round of community workshops earlier this month as part of the QueensWay feasibility and planning project with hopes of engaging the public in plans to transform an abandoned 3.5-mile stretch of railway into a 47-acre linear park and cultural greenway. A series of preliminary design concepts were released this week, showcasing the QueensWay team’s site analysis and ideas contributed by area residents during recent months.

Each of the early design concepts showcased greenery separated by sprawling walkways for Queens residents to peruse. The Friends of QueensWay spokeswoman said the group hoped it would influence a positive dialogue as the QueensWay feasibility and planning study progresses past its early stages. 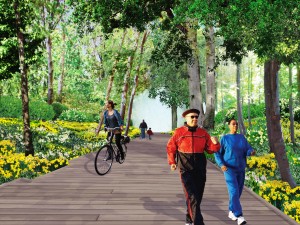 Residents will have the opportunity to provide input on a variety of initial design concepts for the QueensWay. Renderings courtesy Friends of QueensWay

“These two images are examples of some of the initial design ideas,” she said. “This next round of workshops will seek to compile further input on these initial concepts, a variety of additional design concepts and other issues.”

A number of ideas have been floated for the area proposed for the QueensWay, and other civic leaders hope to see the Rockaway Beach Rail Line – a portion of which the QueensWay would use – reactivated. The Long Island Rail Road had run the train line, but it stopped operated in the 1960s and the LIRR sold the line to the city in 1962. Since then, nothing has been done with it, and litter, chipped paint, and general disrepair have replaced the space where the trains once ran.

Other residents, including a number from parts of Woodhaven whose homes border the old rail line, have stressed they do not wish to see either plan emerge in their backyards.

Issues on the agenda for the upcoming QueensWay meetings included a new neighborhood park linking to Forest Park, cultural activities, and ways to address public safety. Residents of Woodhaven have been largely split on whether or not to support a plan that would revitalize the old rail line, with some arguing it would put more stress on the community.

Friends of QueensWay has argued the revitalization proposal would only improve the borough’s standing for the 250,000 surrounding residents.

Assemblyman Mike Miller (D-Woodhaven) has criticized the Friends of QueensWay in the past for what he, and other civic leaders, said was the suppression of the community’s freedom of speech in the first wave of workshops in which meeting organizers planted project supporters to drown out voices of those who opposed, he said.

“I constantly hear the Friends of QueensWay state that they are currently in their ‘feasibility’ phase of the process, which is an unacceptable excuse for not having any answers to the simple questions we all have,” Miller said in a statement. “Further, I constantly hear the word ‘community outreach’ being tossed around, yet what I see is the suppression of the freedom of speech of local residents, which will not be tolerated.”

The second round of workshops were scheduled for Monday March 24 at 7 p.m. at the Metropolitan Expeditionary Learning School in Forest Hills and Wednesday, March 26 at 7 p.m. at the High School for Construction Trades, Architecture and Engineering in Richmond Hill.

“From the beginning of this project, we have been in awe at the amount of enthusiastic support, and stimulating ideas thousands of residents have contributed,” a spokeswoman for the Friends of QueensWay said. “As we embark on this next round of community meetings, we look forward to compiling additional input that will help bring us to the next phase of the project, and that much closer to developing a one-of-a-kind cultural greenway for the Queens community.”