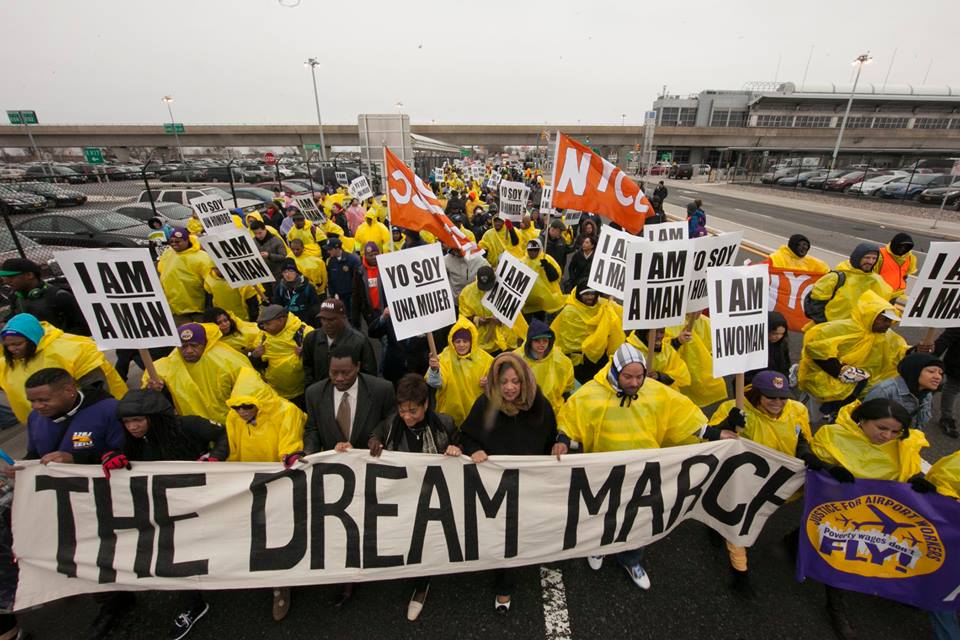 Angry workers added another 10 miles to their journey towards better wages and compensation packages as they trekked between the borough’s busy airports.

The Friday morning rally had protestors plod on from John F. Kennedy International Airport to a LaGuardia Airport bridge, where 32 of them were arrested months ago in a Jan. 20 act of civil disobedience in honor of Martin Luther King Jr. Day.

This time, a rally was launched on the 46th anniversary of King’s assassination in anticipation of the April 28 deadline the Port Authority of New York and New Jersey set for major airliners to craft new contracts that would lift workers out of poverty wages to at least $10 an hour and deliver better benefits.

“What the workers want is an actual three-to-five-year plan that is broad and for the long term,” said Hector Figueroa, president of 32BJ SEUI, which represents a large chunk of the airport workers. “That includes family-sustaining wages and benefits, job protection and collectively bargained contracts.”

The march began in front of the JFK AirTrain’s Lefferts Boulevard station and continued onto Queens Boulevard, where workers and marchers sent a delegation up to the offices of airport contractor Aviation Safeguard. The marchers then continued to the 94th Street bridge near Ditmars Boulevard outside LaGuardia.

Major companies were ordered by the Port Authority in March to develop, research and outline steps needed to increase wages across all Port Authority facilities, starting with the airports. The Port Authority Board of Commissioners will consider and debate that new policy at its April 23 meeting.

Roughly 12,000 subcontracted airport service workers made up the workforce at JFK, LaGuardia and even Newark Liberty Airport in New Jersey, but were not being properly compensated for their work, Figueroa said. 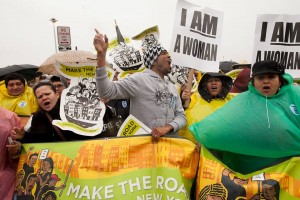 Airport workers at JFK and LaGuardia said they are not paid fair wages nor given benefits. Photo courtesy 32BJ SEIU

Michael Carey, a Kennedy Airport security officer, said he and his coworkers were struggling but remained optimistic about the future.

“We are in a struggle for our very livelihood,” he said. “Any plan, whether it’s from the Port Authority or the airlines and their contractors, must offer us a collective bargaining process so we can negotiate for things like affordable health care and family-sustaining wages and, in the coming years, in response to what is happening in the economy, we can improve our situation incrementally through a contract that we bargain with our employers.”

Just like in the January rally, airport workers received a star-studded panel of politicians and city officials who rallied in their corner. U.S. Rep. Charles Rangel (D-NY) was one of several elected officials who were arrested in the last rally and returned to reiterate his support.

“You cannot ask these hard-working men and women at our airports to do important work, then turn around and pay them poverty wages,” Rangel said. “Our city and our region deserve better and shame on the airlines that are still standing on the sidelines of this effort to improve the lives and communities of these workers.”

The workers have been calling out contractors including Aviation Safeguard, Airway Cleaners, PrimeFlight and Airserv to reform its compensation packages and provide workers with basic benefits like paid holidays and sick days. None of the mentioned contractors returned requests seeking comment.

“Fair wages for airport workers and strong profits for their employers are perfectly compatible, as we have seen in San Francisco,” State Sen. Jose Peralta (D-East Elmhurst) said at the rally. “We can’t stand by while low wages and no benefits lead to an astronomical turnover rate that puts lives at risk. Let’s come to a fair deal and keep our airports running at full capacity.”