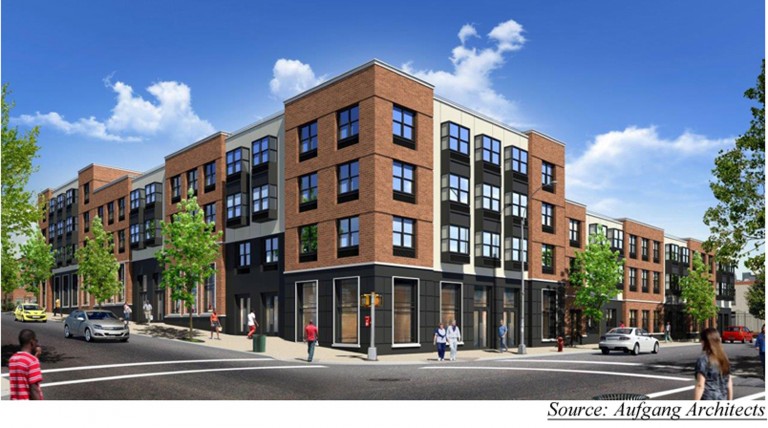 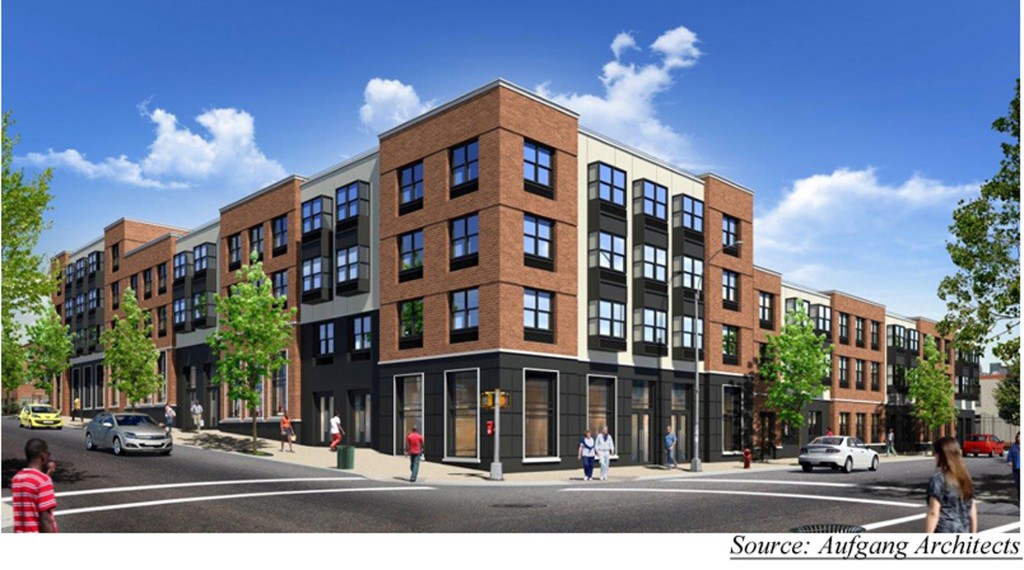 Community Board 5 members last week approved a rezoning proposal for Ridgewood that would make way for an upscale housing development, which has drawn both praise and ire, on Woodward Avenue. Rendering courtesy Aufgang Architects

Community Board 5 voted in favor of rezoning part of Ridgewood to make way for an upscale residential development, but not without a heated debate first.

The 28-11 count did not come easily, with one member waiting until the last minute to cast their vote because of a drastic difference in opinion. One side argued rezoning would make for a more appropriate usage of the mostly vacant property, while others contended it would set a problematic precedent.

“This development is not only preferred, but necessary to live in the area,” said board member Walter Sanchez, who chairs the board’s Zoning and Land Use Review Committee. “It will help reduce illegal activity, provide affordable housing and strengthen the community.”

Sanchez oversaw a public meeting earlier this month in which nearly 20 residents testified in favor of the plan, he said, spurring the committee to throw support behind the plan.

Paul Kerzner, president of the Greater Ridgewood Restoration Corporation, had a different opinion and voiced it with conviction in a minority report he drafted. He spoke alongside Ted Renz to read the report.

“I think we can all agree that nobody likes what’s there now. Nobody. And anybody who does has to have their head handed to them,” he said. “What we’re concerned about is what’s inside the building. The outside will take care of itself.”

Kerzner argued that the current zoning, which allows for manufacturing like woodworking shops, auto storage, repair shops and others, was essential to the greater city economy. Instead, he proposed rezoning the area as a special mixed-use district to allow for both residential housing as well as manufacturing. The proposal sent the board into a deep debate.

Most importantly, Kerzner contended that stripping the spot of its manufacturing status would undo 44 years of community board policy, which typically sought out to protect such zoning.

A city Planning Commission hearing was scheduled for Thursday, April 24th at 10:30 in the second floor conference room of Borough Hall in Kew Gardens under the city’s uniform land use review procedure.

Members of the board first opened the floor to the public at its March meeting to mull over the 176 Woodward Ave. apartment proposal and garnered mixed results. The area, currently zoned for manufacturing and not residential living, since became a hot topic for mid-Queens residents searching for the best solution for what many called a community eyesore.

Aufgang Architects pitched the $18 million plan to board members last month, which included a 90,000-square-foot structure to house 88 residential units, commercial retail space and 118 underground parking spots. Prices to live there ranged anywhere from $1,100 to $1,200 for a studio; $1,400 to $1,600 for a one-bedroom apartment; and $1,700-$1,800 for a two-bedroom apartment, Aufgang said. Part of the project also included a proposed green roof and dog walk so residents could interact with the upper space of the building

City Councilman Antonio Reynoso (D-Brooklyn), whose district includes Ridgewood, spoke before the board heard any reports on the matter and said the numbers did not seem to add up in the first rezoning to happen since assuming office this year. He said the median income the part of Ridgewood he represented was $41,000 a year, which meant the average rent for a family of four there should be $1,025 – which would be less than a studio apartment under the current plan.

“We’ve been extremely narrow-minded and limited as to how we should be doing these project so that we could maximize the benefit for the community,” he said. “That means many things. It’s not just affordable housing. I want to be able to look at it comprehensively and really bring in the community and see things that are different.”