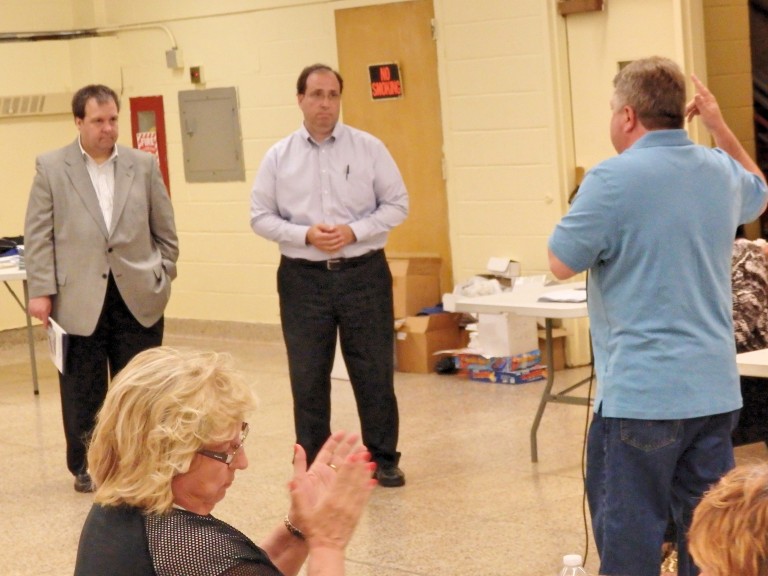 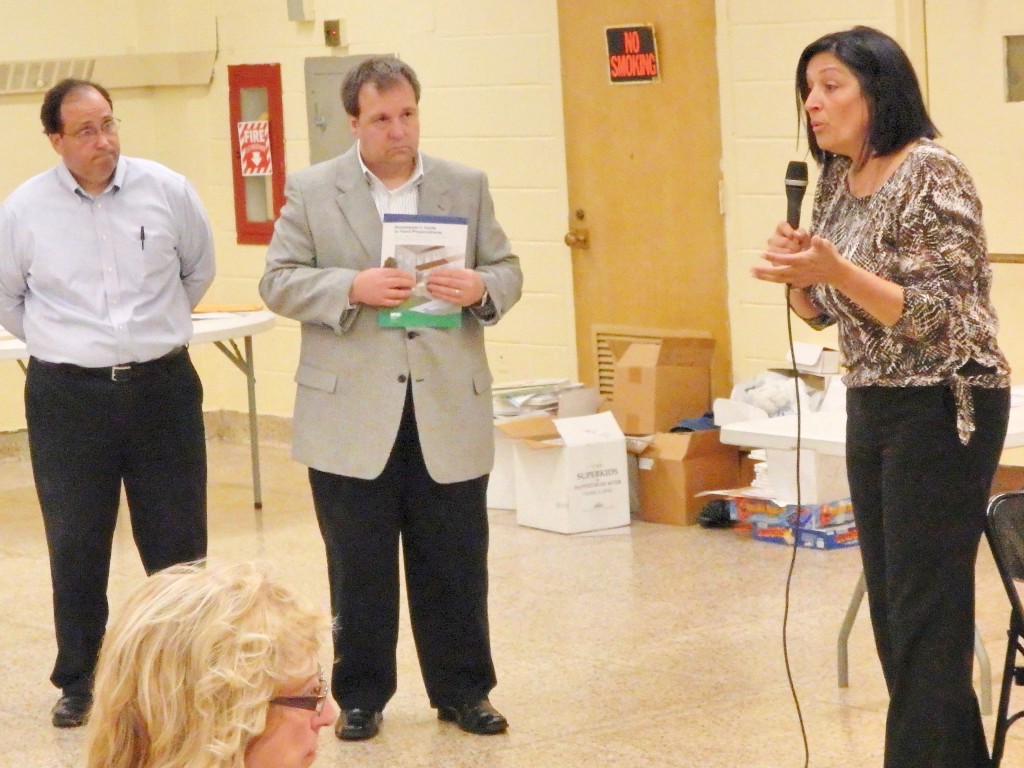 Howard Beach-Lindenwood Civic President Joann Ariola (r.) argues that DEP reps were not helpful in their visit to the group’s Tuesday meeting.
Photo by Phil Corso 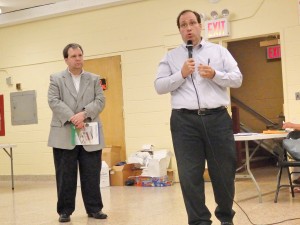 “You cannot give us the answers we want,” she said at the very end of the hour-long discussion with DEP representatives over a devastating flood in her neighborhood at the end of April. “This board was told there would be answers.”

Ariola then motioned to end the meeting.

DEP Deputy Commissioner Vincent Sapienza stood beside Mario Bruno, assistant commissioner for intergovernmental affairs, and fielded question after question over how the city planned on handling water damage claims after more than five inches of rain flooded and left hundred of homes in Lindenwood in ruins on April 30. The agency admitted last month that a malfunctioning sewer facility was to blame but must officially admit fault in a report to Comptroller Scott Stringer’s office in order to assess damages and determine compensation. 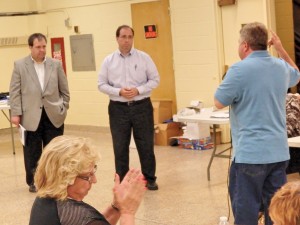 “The homeowners here are living this nightmare,” Ariola said. “The DEP claimed responsibility everywhere except for where it matters. We haven’t seen the letter to the comptroller saying money will be sent.”

Up to this point, the DEP only admitted to sending a preliminary report dated June 19 to the comptroller, Sapienza said. But that report cannot have claims realized until it is made official, he said.

“We want to be cautious about making allegations against contractors that may end up in court,” Sapienza said. “We’re putting that report together now. But we did send a preliminary report to the comptroller on June 19.” 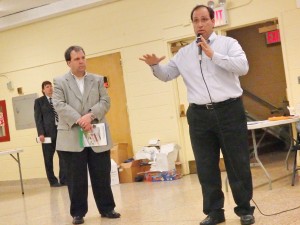 Vincent Sapienza (r.) and Mario Bruno of the DEP outline the failures that led to flooding during the April 30 rainfall in southern Queens. Photo by Phil Corso

Soon after the storm, the DEP released a statement finding its Spring Creek Combined Sewer Overflow Retention Facility on Flatlands Avenue “did not function as intended” and reached capacity the night of the rainfall. The Spring Creek facility, which started service in the mid ‘70s, stores up to 20 million gallons of rainfall and wastewater and reached its limit April 30, along with the Ward and Jamaica Wastewater Treatment Plants on the same evening, the DEP said.

“It is still being assessed which homes were affected by the overflow at the Spring Creek facility,” Sapienza said, sparking an eruption of disgust from the crowd. Several residents shot up and shouted, “It was your fault!”

After the rainfall, residents were urged to file water damage claims with the comptroller’s office within 90 days of the event. Ariola speculated the city was playing games by making residents wait this long for a final report from the DEP and asked the reps if they were simply trying to wait out the 90 days. 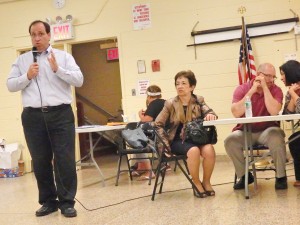 But it was still not specified exactly how long residents will have to wait for a definitive answer.

Members of the civic and residents living within its boundaries flooded into St. Helen’s late last month for a meeting with Stringer, who spoke to an irate crowd over the ongoing flood issues in the neighborhood. Stringer assured residents his office was doing everything within its capacity to ensure it gets the money it deserves – but an official DEP report was the next milestone in that process.

At the group’s May meeting, Stringer said the DEP report was expected to be filed by the first week of June. But with June on its way out, that report was only in its preliminary phase. The DEP did not attend that meeting due to a scheduling error despite many residents’ belief they would have some representatives there to field concerns.