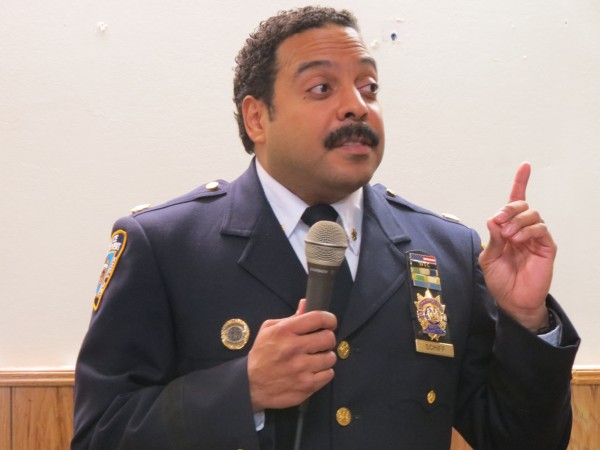 Although the city is adding 1,000 new police officers to city streets this summer, none of the will be heading to the 106th Precinct or the borough of Queens. File Photo

The 106th Precinct in Ozone Park, along with precincts across the rest of the borough, will not see any of the city’s 1,000 new cops hitting the streets this summer due to a more severe need for officers in city districts with higher crime.

Under the terms of the city budget agreement reached in June, 200 civilian workers will be hired for desk jobs that are currently held by officers so they can return to patrol. Another 600 officers were hired after they graduated from the Police Academy this month, and an additional 200 cops will be on patrol duty as the NYPD consolidates some task forces and programs.

The hiring of new police officers was originally going to come with a $94 million price tag, but both Mayor Bill de Blasio and Police Commissioner Bill Bratton refuted that cost. Instead, $6 million will be used to put more officers on city streets and civilians into desk jobs.

Councilman Eric Ulrich (R-Ozone Park) said he was pushing for additional cops in the district during budget hearings because he feels they are needed, but the officers will be stationed in other boroughs instead.

“They’re going to districts like Bedford-Stuyvesant in Brooklyn and some precincts in the Bronx,” Ulrich said.

Calls to the 106th Precinct seeking comment were not returned as of press time.

According to recent crime statistics provided by the 106th Precinct, grand larcenies are down to five so far this year from 13 last year, robberies are down to three from 10 and there have not been any murders.

The 200 officers heading to street patrol from desk jobs will be immediately deployed to enforcement duties, according to a statement city Council Member Vanessa L. Gibson (D-Bronx), chair of the council committee on public safety.

“By civilianizing positions in the New York City Police Department, this budget agreement will make 200 more uniformed officers available to protect the safety of all New Yorkers, especially public housing residents, and is a valuable step toward reducing street crime and gun violence in our city,” Gibson said .

But at least one resident said she was uncomfortable with the borough not receiving additional help. Tina Co, 34, said she knows that some housing projects in the city will see a beefed up security presence because they have a reputation for being dangerous.

But any place in Queens can be seen as unsafe, said Co, whose home was broken into recently.

“They should have some more police here because I have been hearing about rapes that have been happening in Forest Park,” Co said, referencing an incident in August in which a woman was raped in the park. “I know a person that goes running and jogging there and I take my kids there.”

Additional cops that had been assigned to patrol there were removed in October.