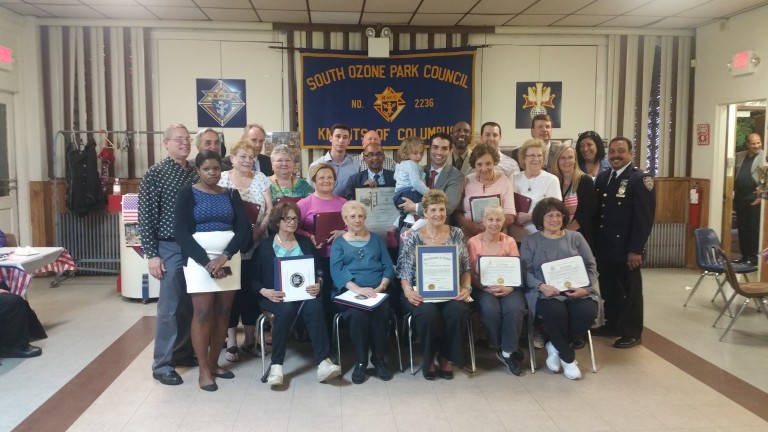 Puddles filled with tears of both joy and sorrow marked Memory Lane last Thursday evening as the Richmond Hill South Civic Association held its final meeting after more than 40 years of advocating for south Queens communities.

The organization, which has been led by Margaret Finnerty for the past 21 years, announced earlier this month that it would be ceasing operations.

“I opened the floor for [leadership] nominations in April and May,” said Finnerty, who retired from full-time work late last year. “However, at this time none of the members are prepared to dedicate their time to the civic.”

The group and its supporters used the final confab at the Knights of Columbus hall on Lefferts Boulevard as a time to reflect on accomplishments, and honor Finnerty and her executive board with awards and proclamations from grateful elected officials on every level of government.

“Tonight is one of those times you’re so happy to celebrate with someone,” said City Councilman Ruben Wills (D-Jamaica), “but at the same time, you don’t ever want them to leave.”

City Councilman Eric Ulrich (R-Ozone Park) arrived with his daughter, Lily, in tow, and spoke of Finnerty as a strong leader who has set an example for younger generations to emulate.

“She really deserves a pension more than a proclamation,” he said. “This is a devastating loss. God knows where this community would be without Margaret and this civic.”

Finnerty announced that Joann Ariola and the Howard Beach-Lindenwood Civic would be taking over some of the popular RHSCA projects, including clipping coupons for soldiers overseas.

“Closing this civic has been one of the most difficult things I’ve ever had to do,” Finnerty said. “I’ve had a lot of fun. It’s been work, but worth it. It’s been amazing.”

Finnerty has said she is looking to traveling and spending more time with her husband, children and grandchildren.

“She’s a very hard act to follow, and those are very big shoes to fill,” said RHSCA Vice President Terri Saporita. “Margaret did a great job, and we all owe her.”