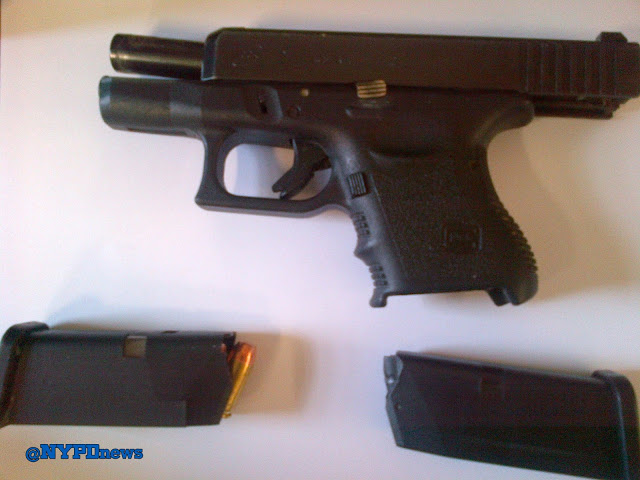 Photo: A loaded .40-caliber Glock semi-automatic handgun was among the items recovered after search warrants were executed at various addresses related to members of an alleged counterfeit credit card scheme. Courtesy of NYPD

A series of indictments last week were handed up in Queens Supreme Court charging 17 individuals from Jamaica, Flushing, St. Albans and parts of Long Island with participating in a forged credit/debit card ring based in the borough that utilized stolen account information bought online to make purchases at stores in the city, Long Island and Rockland County between December 2014 and May 2015, according to Queens District Attorney Richard Brown and Police Commissioner Bill Bratton.

Fifteen of the defendants are in custody and two were still being sought.

Brown said that the 17 defendants, all in their 20s, have been variously charged in six indictments with the crimes of second-degree criminal possession of a forged instrument, fourth-degree grand larceny, petit larceny, attempted petit larceny and third-degree unlawful possession of personal identification information.  If convicted, each faces up to seven years in prison.

The investigation was led by the DA’s Economic Crimes Bureau and the NYPD’s Financial Crimes Task Force; it included seven months of court-authorized wiretaps, physical and video surveillance and thousands of intercepted telephone calls, Brown said

According to the indictments, members of the ring purchased stolen credit and debit card account information online from black market websites, encoded the information on blank credit and debit cards and physically “pressed” the raised numbers and names on the cards. They allegedly hired “shoppers” to purchase merchandise from various retailers and then fenced the merchandise.

Among the establishments that were allegedly hit by the ring are Bloomingdales in Garden City, Target stores in Nanuet and Long Island; Macy’s stores in Flushing, Douglaston and Queens Center Mall; W&H Liquors in Hollis; the Pathmark supermarket in New Hyde Park, and the Waldbaums supermarket in College Point.

“Their alleged crimes victimized not just the businesses—costing them thousands of dollars in losses—but the consumers whose personal identification information was used to carry out the scheme,” Brown said. “Even after the culprits are prosecuted, their victims are still faced with the difficult task of having to repair their credit ratings and financial reputations. In some cases, that process can take years.”

Brown also noted that, as part of the investigation, court-authorized search warrants were executed. It is alleged that in addition to numerous blank credit cards, encoders and pressing machines, a loaded .40-caliber Glock firearm was recovered from the Jamaica home of one of the accused.

According to Bratton, the investigation also revealed the involvement of several Blood Gang members and associates.