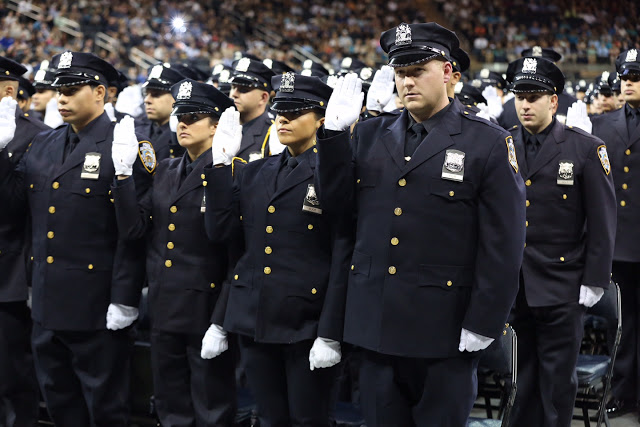 The Police Department last Thursday held its first graduation ceremony since the de Blasio administration announced it had allocated funding in the Fiscal Year 2016 Budget to beef up the blue ranks by nearly 1,300 members.

After six months of intensive training, the class of 822 recruits is the first to graduate from the new Police Academy in College Point, a 32-acre learning facility that consists of lecture halls, tactical training rooms, mock street scenes and environments.

“I want you to understand the importance of what you do; the seriousness of what you do,” Police Commissioner Bill Bratton said during the ceremony at Madison Square Garden. “We’re going to give you the tools and the leadership you need. Why? Because we’re cops—as you are now—and we understand the nobility of this profession. You’re coming into this profession at a time when we need your commitment and your passion. Together, we will make this a safer, fairer city, everywhere for everyone—for the citizens and for you, too.”

The first major citywide deployment for the class was July 4th weekend. The 106th Precinct received 12 rookies, while six newly minted officers have been assigned to the 102nd Precinct. They will be paired with experienced Field Training Officers, who will help them during their first months on patrol. In addition to the FTO’s, the department noted, the new cops will receive guidance from Community Partners, leaders in the areas in which the officers will be working, who will share their insight on topics relevant to the neighborhoods in their respective commands.

Mayor Bill de Blasio congratulated the probationary cops on joining “the ranks of the best police force in the world. We thank you for your dedication to public service and commitment to serving the city of New York with professionalism, respect and integrity. Every day New Yorkers wake up in the safest big city in America thanks to the strongest, most committed law enforcement agency in the nation.”