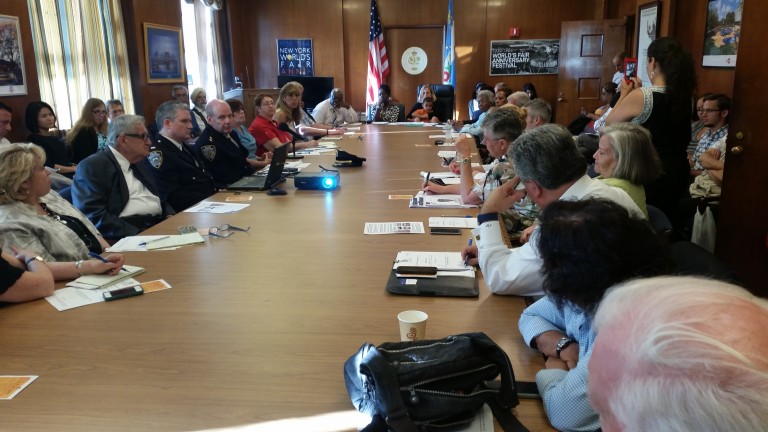 PHOTO:  The city Police Department on Monday detailed the NYPD’s Once City: Safe and Fair–Everywhere initiative at a joint meeting of the Queens Borough Board and Cabinet at Borough Hall.  Photo Courtesy of BP Katz’s Office

The city Police Department this week continued its rollout of initiatives One City: Safe and Fair—Everywhere and Summer All Out as top brass visited Borough Hall on Monday to detail the former to a joint meeting of the Borough Board and Cabinet.

Led by Assistant Chief Terrence Monahan, the presentation focused on One City’s neighborhood policing model, which “aims to build a true partnership between police and City residents in order to further the fight against crime.”

The One City initiative—piloted in four precincts in Washington Heights and the Rockaways—is based on the four “realities” that require change in the way the NYPD does its job, according to Police Commissioner Bill Bratton.

“We must continue to control and reduce crime, especially violent crime, throughout New York. We must detect and deter terrorists, who are radically altering their strategies and recruitment techniques. We must win back community support and build productive partnerships with citizens, especially in communities of color where resentment and fear of old police practices are most prevalent. We must secure the safety and fair treatment of the men and women of the NYPD, many of whom have felt ill-prepared and undervalued.”

Key features of the plan include the division of a precinct into four or five fully staffed sectors, as opposed to the existing eight to 10 sectors that often aren’t fully staffed; newly drawn sector boundaries that closely conform with neighborhood boundaries; the establishment of Neighborhood Coordinating Officers in each sector to identify and manage community concerns; and dedicated time each day for NCOs to be out in the community to establish and nurture relationships.

One City establishes “true sector integrity,” where the same two officers are in the same sector every day with the potential for an additional two regularly assigned cars depending on the sector’s crime rates; the designation of two newly created Neighborhood Coordination Officers per sector who will have the resources and training to work within the community to leverage NYPD assets and partner agencies to help address local problems; the allocation of four cars and eight officers for precinct-wide rapid response; and the utilization of technology and databases in the field.

The push toward community policing, the administration said, will afford officers built-in time to address issues that go beyond standard radio calls. Cops will have the space to meet with residents in their neighborhoods, attend community meetings and address issues beyond calls for service. Morale for both cops and community will grow as they partner in the shared interest of combating crime and improving the quality of life for the community, according to the initiative’s architects.

“The mayor and commissioner’s vision of neighborhood policing is a positive approach for ensuring that officers and the community work together to solve problems in the neighborhood,” said U.S. Rep. Grace Meng (D-Flushing). “It is critical that residents and police be partners in fighting crime, and I thank the mayor and commissioner for working to ensure that this partnership exists.”