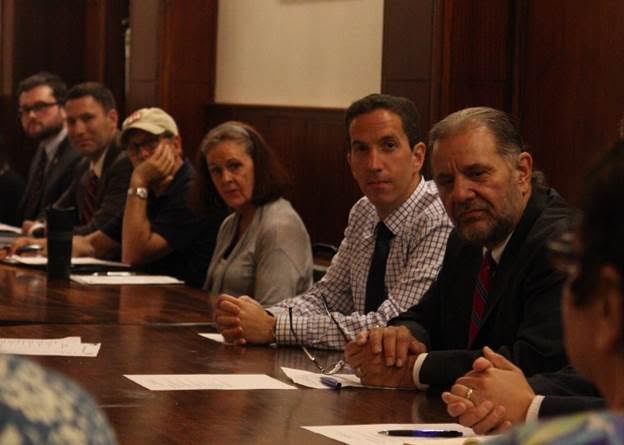 With some communities still showing signs of the impact of Superstorm Sandy nearly three years after the event, Assemblyman Phil Goldfeder (D-Howard Beach) and the city Office of Emergency Management last week put a premium on preparedness and hosted another Coastal Storm Planning Conference.

“We have learned many lessons from Sandy in how we as a community can better prepare for future storms. These discussions are a way for us to come together and share our experiences, to learn from mistakes, reinforce what worked, and ultimately better prepare our families and our city. I want to thank Commissioner Joseph Esposito and his team for their partnership in organizing this latest roundtable and for their tireless work to keep our families safe, both during major disasters and each and every day,” said Goldfeder, who called last Tuesday’s roundtable in Rockaway the “most comprehensive” yet.

The conference was divided into five sessions with an expert presentation and group discussion on: General Population Evacuation, Healthcare Facilities Evacuation, Sheltering, Field Operations, and Community Recovery. Contributors shared experiences and emphasized best practices during future storms. City and state agencies detailed improvements to emergency preparedness and communication, including OEM’s social media presence and ongoing Ready NY campaign to address civic organizations across the city and brief communities on emergency procedures.
The meeting also gave Goldfeder and OEM the opportunity to tout recent storm-preparedness improvements in south Queens and Rockaway. This spring, the Department of Transportation dispatched crews to update the city’s coastal storm evacuation route signage. The work, which Goldfeder had requested, coincided with OEM’s ongoing “Know Your Zone” hurricane awareness campaign, which aims to encourage New Yorkers to find out whether they live in a hurricane evacuation zone, and take steps to plan ahead.
One major development from the discussion was an agreement to include representatives from utility companies in the next roundtable. Civic leaders encouraged the move, citing the need to discuss how to reinforce telecommunications and electrical infrastructure ahead of future storms.

New Hamilton Beach Civic Association President Roger Gendron said “I think it only benefits all of us when the city agencies are not only willing to listen to what the community’s wants and needs are, but to also work with us to see how those wants and needs could be met.”