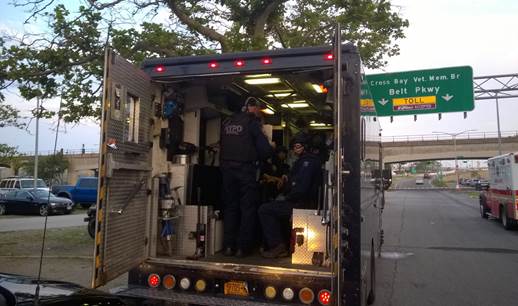 Area elected officials last week lauded the efforts of the city Police Department and Queens District Attorney’s Office in taking down more than a dozen reputed members of a violent Rockaway gang.

Thirteen alleged associates and members of the 70Gs/G-Boyz have been indicted on 86 counts of conspiring to murder and assault members of rival street gangs, as well as conspiring to acquire firearms in order to assert and maintain control over a section of Arverne that they considered their territory and to seek revenge for the shooting of their own members, according to Queens DA Richard Brown.

“Gang violence is not welcome on the streets of the Rockaways and today’s arrests should send a message to anyone looking to start or continue any violence in our neighborhood,” said City Councilman Donovan Richards (D-Far Rockaway). “As we bring in more programs to help our youth stay on the right path, we will always rely on the NYPD and the District Attorney to ensure that the perpetrators of any acts of violence are taken off our streets.”

State Sen. Joe Addabbo, Jr. (D-Howard Beach) noted that his constituents “were right when they requested additional police officers in this year’s city Budget and will be directly benefited by 1,300 new officers at the NYPD, in our city streets and housing projects.”

Brown said that the suspects—who range in age from 16 to 22—allegedly operated between Beach 62nd Street and Beach 73rd Street. During the long-term investigation, law enforcement officers used wire taps and monitored conversations on social media pages belonging to gang members. Gang members allegedly discussed on social media shootings that were being planned or bragged afterwards about the shootings. In one instance, Brown noted, 70Gs member Joshua Simon, 21, fired shots at rival gang members on April 13, 2014, and accidentally hit another individual; he took to social media to apologize to the victim for the shooting and admitted that he had made a mistake.

Authorities also listened to recorded telephone conversations made from Rikers Island. In two separate instances, Simon allegedly admitted that he, along with codefendant Michael Motta, 23, shot a rival gang member on Feb. 17, 2014.

In a separate seven-count indictment, Motta is also charged with attempted murder and other charges for firing a stolen 9mm gun multiple times at rival gang members as they sat in a vehicle outside PS 42 at the intersection of 65th Street and Thursby Avenue. When a police officer identified himself as such and directed Motta to drop his firearm, Motta allegedly pointed the gun at the cop before dropping it. The firearm contained one live round in the chamber and five live rounds in the magazine.

Brown ripped the suspects for “turning the streets of Rockaway into the Wild West.”

Police Commissioner Bill Bratton characterized the case “as a warning to those who use the streets of New York City as their personal battleground” for criminal activity.

“[T]he NYPD has no tolerance for such violent acts and we will use all available resources to remove you from our neighborhoods in order to make this city safe and fair everywhere for everyone.”