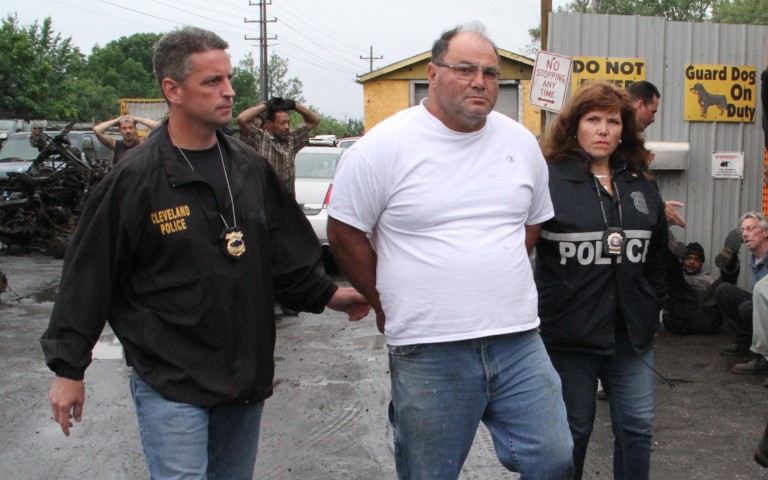 Carmine Agnello, Ozone Park native, reputed member of the Gambino organized crime family, and father of three of mob legend and former Howard Beach resident John Gotti’s grandchildren, was nabbed last week in Cleveland after an 18-month investigation focusing on Agnello’s scrap metal operation and horse racing activities, according to the Cleveland Division of Police and the NYPD.

Agnello, 54, was arrested on charges that include theft, money laundering, conspiracy, drugging animals before competition, cruelty to animals and corrupting sports.

Officers allegedly uncovered multiple weapons at the residence, as well as evidence of illegal dumping at one of the scrap yards.

Agnello, who has a prior record of federal convictions, is precluded by law from owning or possessing firearms.

An investigation was initiated after police in Cleveland noticed a spike in auto thefts over the past three years with no recovery of the stolen vehicles. Multiple scrap yards were identified as likely participants in the scheme.

Authorities indicated that they zeroed in on Agnello due to the scale of his scrap metal operation and the amount of cars processed at his yards. The investigation revealed that Agnello “systemically defrauded” a regional scrap metal processing facility for more than $3 million, investigators said. Additionally, officials learned that Agnello was injecting his race horses with banned substances that he imported to improve their performance at an area track.

“Today’s arrest is a result of the culmination of the determination and efforts of members of the Cleveland Division of Police, the New York City Police Department and law enforcement agencies throughout the country. These law enforcement partnerships ensure that these unlawful acts are stopped and criminals are brought to justice,” said Cleveland Deputy Chief Edward Tomba.

The investigation led to the identification and arrests of multiple individuals and anticipated future indictments of several others, according to Cleveland police.

“Organized crime respects no local boundaries, as today’s arrests indicate,” said Police Commissioner Bill Bratton. “The New York City Police Department remains committed to undoing organized crime regimes and will assist our law enforcement partners throughout the country in their efforts to do the same.”

In 2001, Agnello was sentenced to nine years in federal prison and ordered to forfeit $10 million in assets for another scrap metal business scheme. He was released in 2008.