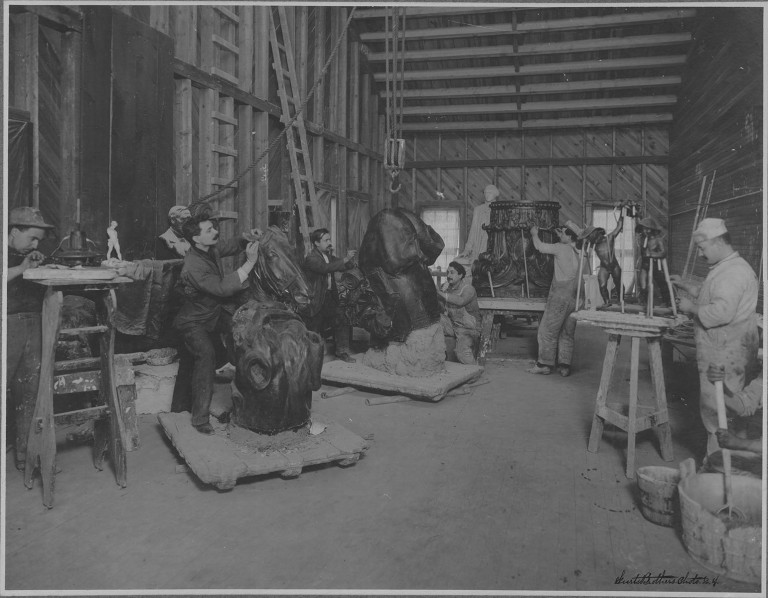 “Reframing Italian America” unveils 23 historical photographs selected from the Bernard Titowsky Collection. Consisting of more than 200 items, the collection belonging to the Queens rare-book dealer and librarian was donated to the college’s John D. Calandra Italian American Institute by his son, Michael Titowsky.

The exhibition is on view Monday–Friday, 9 a.m. to 5 p.m. through Jan. 8, 2016, at the institute located in Manhattan at 25 West 43rd St., 17th Floor. A catalog with 41 photographs, as well as essays by Dominique Padurano, Joseph Sciorra, and actor John Turturro, will also be available for purchase.

“These featured individuals and the collective they create in group shots are of an industrious, orderly, church-going, and socially engaged people,” said Sciorra, the institute’s director of Academic and Cultural Programs. “These are markedly different depictions of Italian immigrants than we find taken by others of the era such as social reformer Jacob Riis, whose muckraking work on New York City’s impoverished Italian slums oscillates between the ‘exoticizing distance’ of the picturesque and the ‘stark racially othering’ of the destitute.”

The photos were chosen for the diversity of their settings and for their importance as “social documents of Italian immigrant life,” Sciorra noted. The fields represented cover commerce, education, religion, artistry, and labor—from manual workers such as sandhogs working on the tunnels of Penn Station in the city, to male hat-makers and female garment workers, to artisans such as finishers at the Roman Bronze Works. Professionals are represented as well, including newspaper editors, presidents of banks, and factory owners.

According to Sciorra, most of the immigrants in the photos posed for the camera and maintain a formal public persona, aware that the very occasion of a photograph is a special one. Some of the laborers, who may have posed in a studio, suggest a sense of satisfaction and pride. At the same time, the subjects are shown engaging in work that has shaped the country: building rail stations and tunnels, founding schools and churches, providing needed services and goods. Thus they are displaying and representing themselves as Italian Americans as they refashion themselves in the process of transforming America, Sciorra posited.