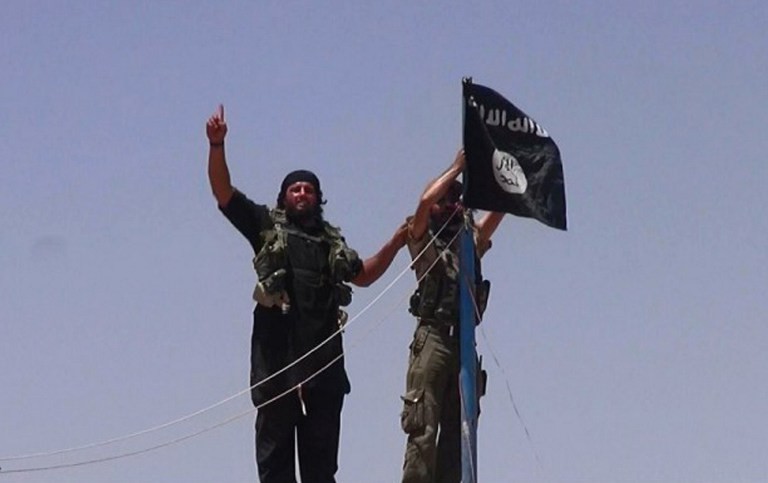 PHOTO:  In this June 2014 image, militants of the jihadist group Islamic State of Iraq and the Levant hang the Islamic jihad flag on a pole at the top of an ancient military fort near the Iraq-Syria border.  Photo Courtesy of AFP Photo/HO/Al-Baraka News

A federal grand jury in Brooklyn last week returned an indictment charging borough resident Munther Omar Saleh with conspiring and attempting to provide material support to the Islamic State of Iraq and the Levant, and with assaulting and conspiring to assault federal officers, according to authorities.

During the conspiracy, Saleh and Fareed Mumuni expressed “fervent support” for ISIL.  Saleh, who lives in Flushing, and Mumuni allegedly conspired to conduct an attack in the United States, including plotting to use a pressure cooker bomb in the New York metropolitan area on behalf of ISIL, according to the U.S. Attorney’s Office.

On June 13, Saleh and another individual were arrested in Queens after they allegedly charged at a federal officer while armed with knives after pulling over on the Whitestone Expressway. The agent reportedly had been tailing the duo.

And four days later, during the execution of a search warrant at his residence in Staten Island, Mumuni was arrested after repeatedly stabbing a Federal Bureau of Investigation agent in the torso with a large kitchen knife. Fortunately, said Kelly Currie, acting U.S. attorney for the Eastern District of New York, the blade did not penetrate the agent’s body armor. During a search of the vehicle used by Mumuni, investigators recovered a second large knife.

“Both Munther Omar Saleh and Fareed Mumuni allegedly conspired to provide material support to ISIL.  Both men also attacked law enforcement officers who work to keep our communities safe,” Currie said. “The officers exercised extraordinary skill and restraint in safely subduing the defendants, who will now face the full force of justice in federal court.”

If convicted, Saleh faces a maximum sentence of 65 years in prison.

“Stabbing an FBI agent and providing material support to a designated terrorist organization [is] a recipe for indictment, as alleged,” said Police Commissioner Bill Bratton. “I commend the agents and detectives from the Manhattan-based Joint Terrorism Task Force and prosecutors in the Eastern District for their work on this case.”