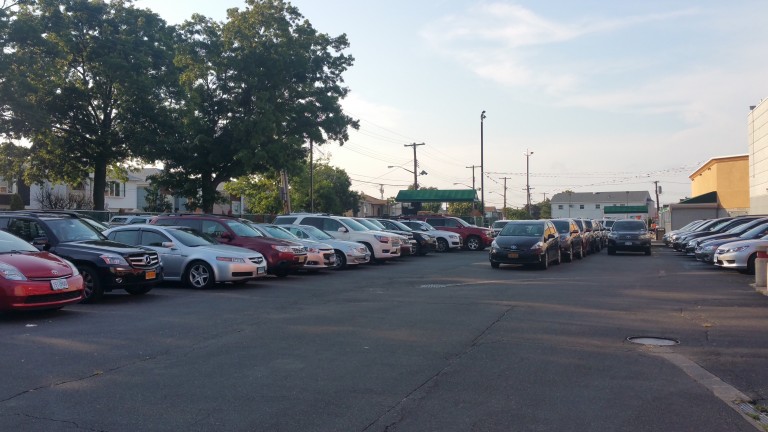 PHOTO:  A parking facility has been set up in the shuttered Staples lot just off Cross Bay Boulevard. When the lot fills, residents say overflow vehicles are parked on 92nd Street between 163rd and 164th avenues.  Forum Photo by Michael V. Cusenza

They have been among the top quality of life complaints in the city since early autos ambled around the Big Apple.

They affect every corner of New York. Just ask any born and bred borough resident about noise and parking. They’ll surely tell you that both have been a steady source of aggravation for generations.

But since the spring, the parking situation on one New Howard Beach block has left many residents in a seemingly perpetual state of searching—for a decent spot, and answers.

“We’re playing musical chairs just to get a spot in the street,” said one native of 92nd Street between 163rd and 164th avenues who still visits family on the block every day. “It’s always packed, 24-7. It’s never been like this. We’ve always been able to park our cars on the block.”

The problem, many neighbors told The Forum this week, is emanating from the parking lot of the Staples building, which closed last year.

But the lot has not been shuttered. Indeed, it appears to have become a thriving parking facility—which has greatly impacted the quality of life on neighboring 92nd Street.

Residents said that when the lot is filled, overflow vehicles are parked on their block, taking up the majority of available spots.

“It’s a nuisance,” said a man who has lived on 92nd Street for the last 15 years and asked that his name not be published. “It’s ridiculous. This used to be the best block for parking.”

A visit to the area this week revealed a packed parking lot teeming with vehicles. Closer inspection shows each auto with what appears to be a valet ticket displayed on the dashboard. However, the stubs contain no information regarding the possible company that is running the operation.

But the tickets in the vehicles that are parked on 92nd Street are not as visibly advertised as the ones on the dashes of the cars in the Staples lot. Instead, they are purposefully placed on top of the drivers-side floor mats.

And residents indicated that it appears to be a 24-hour operation, with white vans picking up and dropping off auto owners round-the-clock.

Police have said that they are aware of the situation.

“It’s crazy,” one woman lamented, “we come home [from work] and there are no spots.”

Messages left at Schuckman Realty, the real estate contact for the property, were not answered.

The parking problem has left many 92nd Street neighbors exasperated, with many saying that littering and illegally discarded garbage have also become issues since the lot opened for business earlier this year.

“I live here,” the woman added. “That’s why I pay taxes—to live in a residential neighborhood.”

In joint missives sent to the major airline companies at JFK, Goldfeder and Ulrich are calling on the carriers to respond to reports of employees parking in Howard Beach, Ozone Park and adjacent neighborhoods to commute to the airport via the nearby AirTrain station. This practice, Goldfeder and Ulrich said, takes up valuable parking spaces and increases traffic on otherwise quiet residential streets.

“Our middle class families work hard and deserve to enjoy the community they invested in, without having to spend their days and nights circling the block looking for parking,” Goldfeder said. 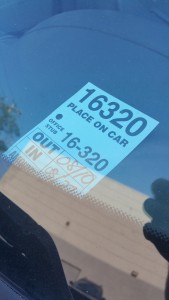 It even features valet tickets, though neighbors have questioned the legality of the operation. Forum Photo by Michael V. Cusenza