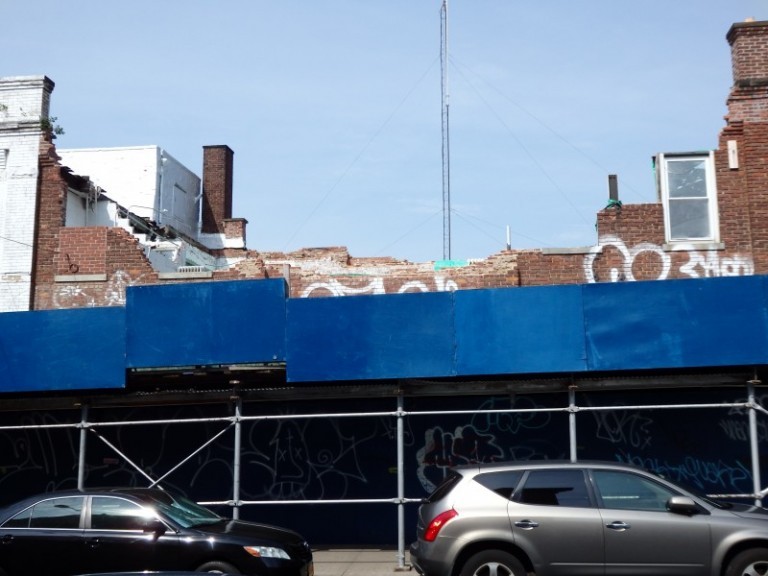 PHOTO:  The roof of the partially collapsed building on Jamaica Avenue still has not been fixed.  File Photo

But the organization, and its crippled Jamaica Avenue headquarters—both hailed as “critical to the lives of Woodhaven residents” by state Sen. Joe Addabbo, Jr. (D-Howard Beach)—seem to be in grave condition, and might not make it to 51.

Last Saturday, at the monthly meeting of the Woodhaven Residents’ Block Association, Assemblyman Mike Miller (D-Woodhaven) said a crucial deadline is fast approaching: If repairs are not made to the partially collapsed roof of the adjacent building, and to the corps’ headquarters, by November, the edifice will no longer be insured.

Earlier this year, the WRHVAC indicated that, after a Queens Supreme Court judge granted another construction extension to the owner of the building next door, they would have to cease operating.

The latest extension was a troubling development, particularly for the corps, because structural damage and safety concerns from the collapse, which occurred two years ago, had forced them to temporarily shut down. And Catholic Charities Woodhaven-Richmond Hill Senior Center, which rented building space from the first responders, subsequently relocated, effectively cutting off a critical source of revenue for the WRHVAC.

The extension kept the corps in limbo and the Center out of its building, making it nearly impossible for them to once again serve the community.

Miller, who indicated that he has allocated funds for WHVAC resources, including new vehicles, said he has reached out to the city Department of Buildings, and is open to ideas on how to properly rescue the flagging organization.

In March, Addabbo told The Forum that he has appealed to the owner of the partially collapsed structure, George Kochabe, to have his contractor patch up the part of the building that is affecting the WRHVAC headquarters.

“They just need to seal off the leakage, seal that back end,” Addabbo noted. “I need [the owner] to get that done, so the Ambulance Corps can get started on its property.”

The leaks have caused extensive mold damage in the WRHVAC building.

Addabbo said he has also spoken to a lot of area seniors who have expressed their desire to return to the building.

“It’s a domino effect,” he reasoned of the events that followed the collapse which have impacted different stakeholders in the community.

Other highlights of Saturday’s WRBA meeting include the announcement that the civic helped raise more than $1,000 for New York Families for Autistic Children from July’s graffiti cleanup effort.