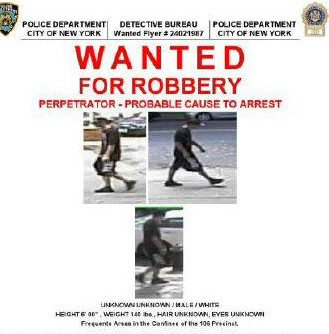 PHOTO:  Cops this week were still hunting a suspect wanted for robbing a man in Lindenwood last Wednesday night. Photo Courtesy of the 106th Precinct

Police this week were still searching for a suspect wanted in connection with the strong-arm robbery of a Lindenwood resident.

According to Deputy Inspector Jeff Schiff, commanding officer of the 106th Precinct, the suspect approached a man last Wednesday on 88th Street near 151st Avenue, raised his shirt to reveal a silver firearm, and demanded cash.

The perpetrator is described as a white man, approximately 6-feet tall and weighing 140 pounds, who was wearing a red baseball cap, black T-shirt, black shorts, and sunglasses at the time of the robbery. He also has an arm tattoo, and “frequents areas in the confines of the 106th Precinct,” Schiff said.