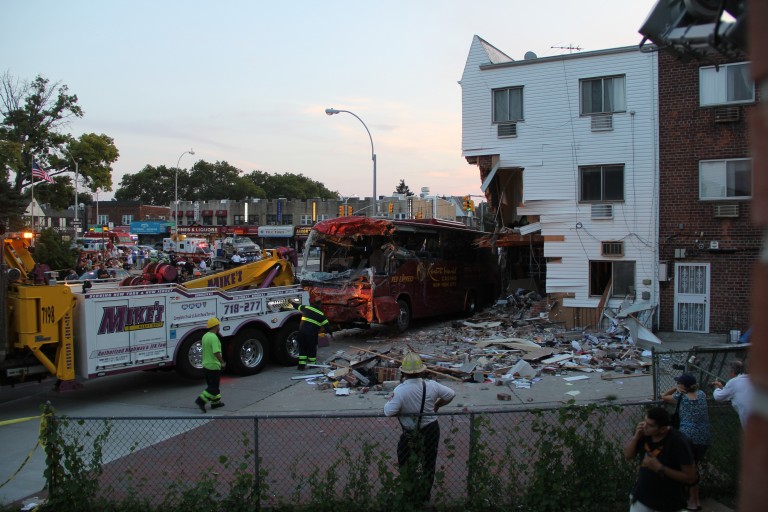 Eight people were injured on Monday afternoon in Rego Park when a Resorts World NYC bus slammed into a three-story building just off Woodhaven Boulevard after swerving to avoid colliding with an SUV, police and published reports said.

Five passengers and the casino coach driver, who was pinned to his seat and seriously hurt, were taken to area hospitals. Fire Department personnel required the so-called Jaws of Life to extricate him, according to NBC News 4 New York. Two other individuals were treated at the scene.

Several accounts depicted the Resorts World vehicle traveling northbound on Woodhaven Boulevard in the newly minted bus lane when an SUV, which also was heading northbound but in the lane to the left of the bus, made a sharp right turn at 63rd Avenue in front of the coach, causing the RW driver to swerve violently to the right, and the bus careening off the thoroughfare into the mixed-use edifice’s brick façade.

The rear of the 63rd Avenue side of the building at 62-87 Woodhaven Blvd. bore the brunt of the impact, which sent bricks and debris cascading down on top of the bus.

“Our thoughts and prayers are with those impacted by the bus accident,” said a spokesman for Resorts World. “We are cooperating fully with the authorities in the investigation.”

The casino buses are operated by Trans Express Inc., which did not return calls seeking comment.

The driver of the SUV remained at the scene and was reportedly issued a summons for attempting to make the turn.

The Department of Buildings has issued a full vacate order, indicating that the “structure has been rendered unsuitable for occupancy.”

Traffic along Woodhaven Boulevard, one of the borough’s main transit arteries, returned to normal on Monday evening. The casino coach was towed away the same night.