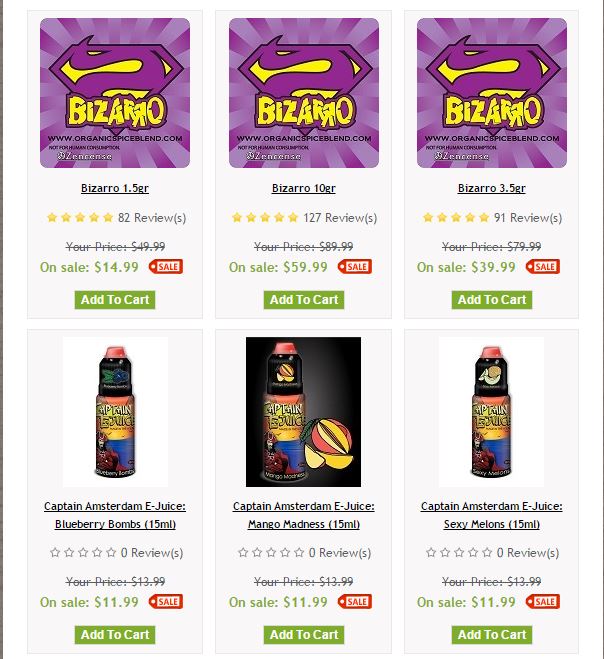 PHOTO:  U.S. Sen. Charles Schumer this week tapped the DEA to create a special unit to police vendors using websites, such as OrganicSpiceBlend.com (pictured), to sell illegal synthetic drugs online, and to notify credit card companies and other payment processors such as PayPal and Venmo of bad actors.  Photo Courtesy of OrganicSpiceBlend.com

No less than four City Council committees on Monday convened for a joint oversight hearing on the de Blasio administration’s multi-agency strategy to reduce the demand and supply of synthetic marijuana, also known as “K2.”

Since January, according to Mayor de Blasio’s office, there have been more than 4,500 synthetic marijuana-related emergency department visits in the city, with more than 1,200 of those visits occurring in July. Males account for approximately 90 percent of the emergency room visits. Patients have a median age of 37 and are disproportionately residents of shelters and individuals with a psychiatric illness; and 99 percent of synthetic marijuana-affected patients are 18 and older.

City Councilman Ruben Wills (D-Jamaica), the prime sponsor of Int. 917, one of a series of bills aimed at stopping the flow of synthetic drugs onto Big Apple streets, said the package of legislation represents “a very measured yet forceful response to the K2 crisis that is threatening to engulf our city.”

“Intro 917 will not target individual users,” Wills continued. “My co-sponsors and I want only treatment and rehabilitative services for those who are struggling with addiction and other mental health issues, but we intend to act swiftly to choke off the pipeline that has allowed these drugs to flourish, and make it unbearable for any person or group of people to sell K2 in our city.”

In addition to criminal and civil penalties, Intro 917 “would authorize the sealing of businesses that violate the provisions of this bill twice in a three-year period,” according to the official summary of the proposed law.

In another synthetic marijuana development this week, U.S. Sen. Charles Schumer (D-N.Y.) announced that he has sent a letter to acting Drug Enforcement Administration Administrator Chuck Rosenberg, urging the agency to create a special unit to police vendors currently using websites to sell illegal synthetic drugs online, and to notify credit card companies and other payment processors, such as PayPal and Venmo, of bad actors.

Schumer noted that, while it is illegal to sell or distribute synthetic marijuana in New York City and State, the drugs can easily be purchased online with little to no consequence.

“In this new modern marketplace,” Schumer wrote in his missive to Rosenberg, “it is critical for experts from the DEA to sweep the web seeking out and investigating online purveyors of illegal synthetic drugs and then coordinate with payment processors to ensure that sales on these websites are shut down.”