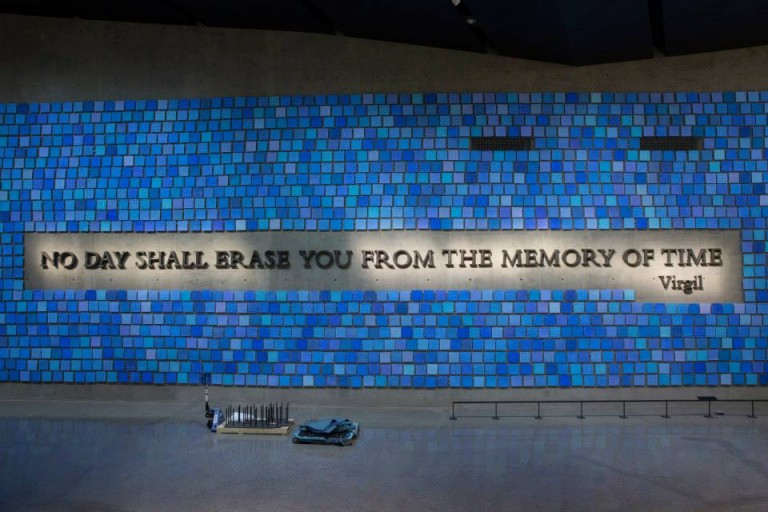 PHOTO:  Quote attributed to the ancient Roman poet Virgil emblazoned on a wall inside the National September 11 Memorial and Museum.  Photo Courtesy of FDNY

Fearing that the heroic actions and sacrifices of first responders and volunteers on Sept. 11 might not be truly appreciated by future generations, Assemblyman Phil Goldfeder (D-Howard Beach) this week said he has drafted legislation that would create the September 11th Remembrance Day in schools across the state.

The bill amends Education Law to make special provisions for the observance of a “brief period of silence” each Sept. 11 at the start of the school day. According to the language in the bill, this would provide students with the “opportunity for silent prayer or for silent reflection” on the anniversary day.

According to Goldfeder, the bill was inspired by conversations with victims’ families and first responders from the community.

The 23rd Assembly District district includes one of the largest concentrations of uniformed police officers and firefighters in the five boroughs, as well as most of the city’s volunteer fire departments and many employees who worked at the old World Trade Center.

“After the tragedy that this city experienced on 9/11, it is hard to imagine that this day of historic loss goes unnoticed in the schools of this city and state,” said Dan Mundy, Jr., president of the Broad Channel Civic Association and an FDNY battalion chief. “Currently, this is just another day in the school year that passes without any mention made of its importance. It should be unacceptable to New Yorkers that our next generation would not understand the significance of that day in history and to this city. Thankfully, Assemblyman Goldfeder has moved to correct this oversight with his legislation creating a ‘September 11th Remembrance Day’ to mandate a moment of silence in our schools to reflect on and remember this tragedy.”

Last month, at a Sept. 11 memorial ceremony on Cross Bay Boulevard, state Sen. Joe Addabbo, Jr. (D-Howard Beach) said that such vigils are crucial to honoring the memory of those that made the ultimate sacrifice.

“The younger generation needs to know the stories of the people who went to work that morning and never came home,” he said. “They need to hear the stories of the heroics. It’s important every day that we remember the people who all they did was get up and go to work that day. It’s important to remember every person who worked that Pile and who still suffers today. Remember – within all that horror, we saw valor in individual people.”