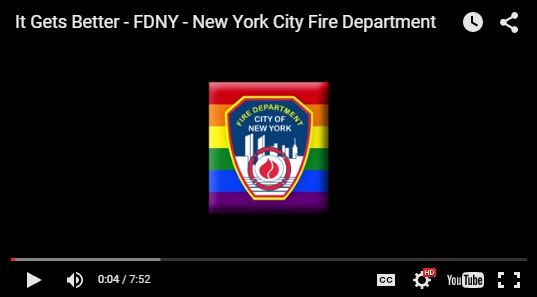 PHOTO:  The city Fire Department released an ‘It Gets Better’ video on Monday, National Coming Out Day. Photo Courtesy of FDNY
The city Fire Department last Sunday—National Coming Out Day—released its inaugural “It Gets Better” video in support of the It Gets Better Project.
In the agency-produced video, 12 active-duty FDNY firefighters, paramedics, and emergency medical technicians discuss the challenges they faced throughout their lives, and the success they have found both as adults, and as members of New York’s Bravest.

“As firefighters, paramedics and EMTs in the most diverse city in the world, FDNY members have the tremendous opportunity to inspire young people through their brave work every single day,” said Fire Commissioner Daniel Nigro. “Through this video, they deliver an important message to lesbian, gay, bisexual, transgender, queer and questioning youth around the world: “It absolutely does get better.”

Founded in 2010 by Dan Savage and Terry Miller, the It Gets Better Project is a nonprofit organization that uses all forms of media and engagement to reach LGBT youth worldwide in order to provide support and hope that life indeed gets better.

According to the Project, to date, more than 60,000 inspirational videos have been uploaded in support of It Gets Better and the LGBTQ community, including support from President Obama and more than 500,000 others who have taken the pledge to spread the group’s messages of hope and speak up against intolerance. The Project noted that it has recently expanded its support of LGBTQ youth on both a national and global scale, serving as a resource on policy and legal matters.

“With their It Gets Better video, the brave men and women of the FDNY have made a powerful statement in support of LGBT youth,” said Brett Peters, director of Communications for the Project. “By fostering such a welcoming community in the workplace, the FDNY is helping lead the way in encouraging LGBT young people to be whoever they want to be.”

National Coming Out Day celebrates the milestone March on Washington for Lesbian and Gay Rights—Oct. 11, 1987, according to the Human Rights Campaign. It was the second such demonstration in D.C. and resulted in the founding of a number of LGBT organizations. Recognizing that the LGBT community often reacted defensively to anti-LGBT actions, members came up with the idea of a national day to celebrate coming out and chose the anniversary of that second march on Washington to mark it.