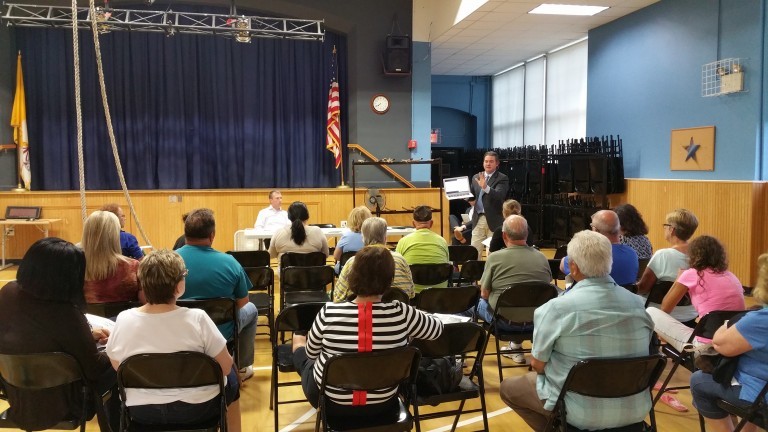 More than a dozen Howard Beach homeowners have retained the services of attorneys Bill Kelly and Brian Haughtaling and re-filed with the Federal Emergency Management Agency to have their Superstorm Sandy flood-insurance claims reviewed, Kelly told The Forum this week.

In August, Kelly and Houghtaling led two Forum-organized Town Halls and implored those in attendance to re-file with fraud-addled FEMA before the deadline. As a result, Kelly said, they have signed up 15-20 clients.

“I’ve represented over a thousand homeowners who were told they were entitled to no more flood insurance money,” said Kelly, a Rockaway native and partner at McCarthy & Kelly LLP. “We have recovered more than $55 million for Sandy victims. A hundred percent of the people I have represented have been paid.”

Kelly and Houghtaling, partner at New Orleans-based Gauthier, Houghtaling & Williams who fought FEMA after Hurricane Katrina and won, have estimated that people who have Sandy flood insurance claims have each been underpaid by the insurance companies by $100,000 to $110,000.

And Kelly and Houghtaling said their clients who have re-filed have received an average of $107,000.

“We are continuing to fight for our Howard Beach clients to get their flood insurance claims paid in full,” Kelly told The Forum on Tuesday. “Howard Beach is a coastal area that was hit particularly hard by Sandy. The homeowners in Howard Beach were treated unfairly by their flood insurance carriers and FEMA. They were ruthless in their underpayment of Sandy flood claims. They took advantage of homeowners at their weakest moment.  We are going to right that wrong. We believe that we will be as successful in Howard Beach as we have been in other areas of New York.”

The fraud first came to light in a “60 Minutes” segment detailing how private engineering companies purposefully altered engineering reports so as to not fully reflect the true impact and damage caused by Sandy to New Yorkers’ homes, which led to the unjust denial or underpayment of flood insurance claims.

“Engineers just said they couldn’t stand by and watch this anymore,” said Houghtaling.

“I’ve been suing insurance companies for 24 years,” Kelly added. “I’ve never seen anything like that.”

Hundreds of flood-damage reports were allegedly falsified, and both engineering firms and insurance companies are under investigation by the Department of Homeland Security Office of Inspector General and state Attorney General Eric Schneiderman for possible criminal conduct.

As a result, federal officials announced in March that FEMA has agreed to reopen and review every flood insurance claim—approximately 144,000—filed by Sandy victims, and not limit corrective action to just the 2,200 that were in litigation at the time.

Kelly also said that he and Houghtaling made a concerted push to inform Howard Beach homeowners in particular because “this area was extremely underserved, in terms of legal representation.”

Asked why, Kelly offered in August, “I think what has happened at this point is a defeatist attitude.”