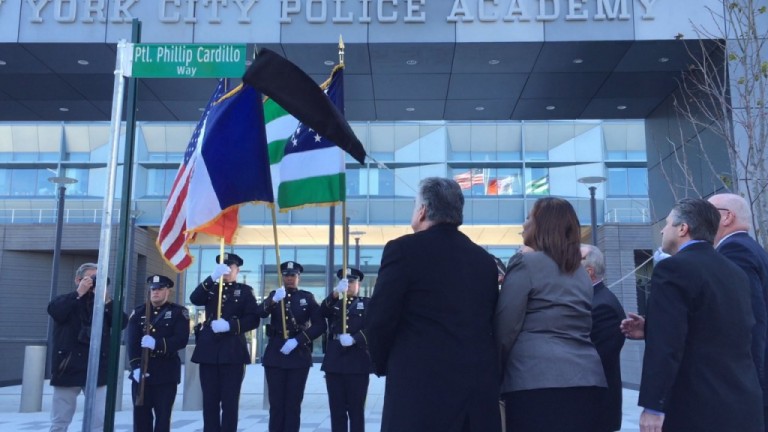 PHOTO:  The city and its Police Department this week honored the memory of Patrolman Phillip Cardillo, who was killed in the line of duty in 1972, by co-naming the street on which the new Police Academy stands ‘Ptl. Phillip Cardillo Way.’ Photo Courtesy of NYPD

Just a day before another city police officer was killed in the line of duty this week, the NYPD co-named the College Point street on which the new Police Academy stands in honor of a cop who made the same ultimate sacrifice 43 years ago.

On April 14, 1972, Cardillo responded to a report of a 10-13—officer in need of assistance—inside Harlem’s Nation of Islam Mosque No. 7 on West 116th Street. Upon entering the building, Cardillo and his partner, Vito Navarra, were attacked by numerous men, according to the NYPD. During the assault, Cardillo was shot and critically wounded. Responding officers were able to get the 28th Precinct patrolman out of the building and rushed him to the hospital, where he succumbed to his injuries six days later.

“Soon, generations of new officers will be able to look to the sign and know [Cardillo’s] story and legacy to the department,” said City Councilman Paul Vallone (D-Bayside), who represents College Point and the 19th District in the Council. “May this sign forever remind us of the sacrifices that the men and women of the NYPD are too often asked to selflessly make, as well as serve as a symbol that these sacrifices are never forgotten. This recognition has been long overdue and I couldn’t be more proud to right the wrongs from 43 years ago.”

This summer, NYPD Harbor Launch No. 701 in Brooklyn was also dedicated in Cardillo’s memory.

“It is my honor and privilege to participate in this,” a visibly emotional Bratton said during the July ceremony.