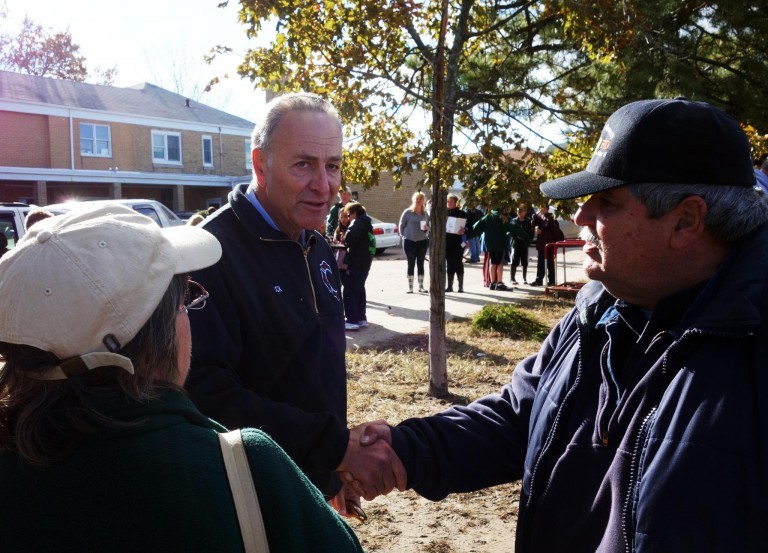 PHOTO:  U.S. Sen. Schumer, seen here greeting constituents in Breezy Point after Sandy, is urging FEMA to carefully review cases in which the agency believes that storm victims may have been overpaid or improperly paid before referring cases to ​the ​Treasury Department for collection of the excessive payments.

The Federal Emergency Management Agency should properly vet and carefully review cases in which the agency believes that Superstorm Sandy victims may have been overpaid or improperly paid before referring said cases to the Department of the Treasury for collection of these excessive payments, U.S. Sen. Charles Schumer (D-N.Y.) said last week.

In a personal letter to FEMA Administrator Craig Fugate, Schumer urged the agency “to establish a Superstorm Sandy Recoupment Review Process and would require that all current and pending cases in which disaster assistance funds are sought to be recouped, be vetted through this process prior to being referred to Treasury for collection. This review process would require FEMA to fully evaluate all of the facts and circumstances of an individual’s disaster assistance grant and it would also require outreach by FEMA to the recipient to obtain any additional information that the individual has to offer that may better inform the facts surrounding the recoupment effort.”

Schumer noted that his call comes in the wake of reports that FEMA continues to attempt to claw-back funds from some Sandy victims—without evidence of fraud or purposeful manipulation and without awareness of additional details that may justify the initial grant amount.

The senator said that a Superstorm Sandy Recoupment Review Process would help make sure that homeowners are treated fairly and prevent others from having to deal with a bureaucratic burden.

Schumer is a co-sponsor of legislation, the Disaster Assistance Recoupment Fairness Act of 2015, that would direct FEMA to waive its recoupment policy. He has said that, until this legislation becomes law, FEMA should ensure that its efforts to recoup individual assistance funds are based on accurate and complete information.

“Requiring Superstorm Sandy victims to repay thousands of dollars in aid, nearly three years after the storm, is just plain wrong and counterproductive, since these funds have already been spent on crucial repairs necessary for getting storm victims back on their feet. FEMA should waive all debt among Superstorm Sandy victims, except where there is clear evidence of fraud,” Schumer said. “That is why I’ve introduced legislation that will make sure that these victims can keep this much-needed money and am also asking FEMA to establish a formal review process prior to any recoupment attempts. This would prevent people who have done nothing wrong from getting stuck with both a bill and a total that is through the roof because of an unfair interest rate.”

Schumer’s message to Fugate also asks FEMA to “refrain from making any further case referrals to Treasury until this process is set up and all currently pending cases are properly reviewed. Further, FEMA should also instruct Treasury to suspend efforts to collect on any cases that have already been referred to Treasury and return those cases to FEMA until they can similarly go through this new Review Process.”

Asked for reaction to Schumer’s missive and requests contained therein, FEMA spokeswoman Susan Hendrick said, “We share the senator’s desire to do everything possible to support survivors after a disaster. We’ve received the letter and we look forward to responding directly to Senator Schumer.”